Smarter Than You Think: Sherlock Holmes & the Ripper of Whitechapel 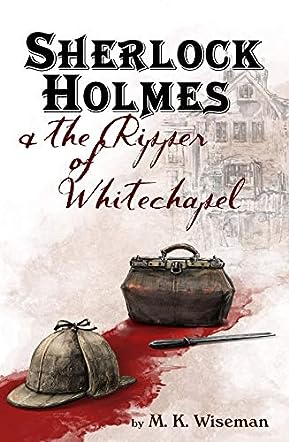 Sherlock Holmes is called in by Scotland Yard to investigate the grisly murders taking place in the streets of London and find the notorious killer, Jack the Ripper, in the phenomenal sleuth murder mystery, Sherlock Holmes & the Ripper of Whitechapel by M. K. Wiseman. Since his good friend Dr. John Watson got married a year ago, he has seen or heard little from him, and Sherlock Holmes has been principally left to his own devices. During one of their infrequent meetings, John advised Sherlock to avoid getting involved with the investigation of the shocking evisceration of women that had been occurring. However, when Inspector Lestrade requests his assistance, Sherlock takes on the cases. Unfortunately, the police are bungling the investigations and inadvertently destroying essential clues. Simultaneously, John is acting out of character and disappearing for a day at a time. Concerned for John's welfare, his wife Mary consults Sherlock. But the more Sherlock investigates both the murders and the extraordinary actions of his friend, the more the evidence points toward John. Has Sherlock missed an important clue? Or is it possible that Dr. Watson is Jack the Ripper?

Redolent of the classic canon of the inimitable English sleuth and his doctor colleague, Sherlock Holmes & the Ripper of Whitechapel by M. K. Wiseman is a stunning work. It is a brilliant story that held me spellbound from start to finish; I couldn't put it down for anything. Although it is based on Sir Arthur Conan Doyle's literary characters and London's historical Jack the Ripper, the plot is astoundingly genuine and fresh. Skillfully depicted, the writing style imitates the original series to perfection, and yet, at the same time, supersedes its predecessor. I cannot praise the story enough; it is exemplary! The fictional aspects are cleverly fused with the historical facts, creating a convincing fictional account of Jack the Ripper's horrific butchery that occurred in London during the late 1880s. Filled with murder, mystery, and suspense, this captivating novel will not fail to delight Sherlock Holmes fans and sleuth fans alike.