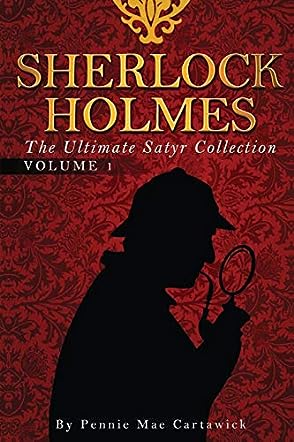 Although Pennie Mae Cartawick has been writing for many years, she has only recently decided to publish some of her work. Her first book as a new author 'Choosing the right diet for success' became a best seller. Her very first publication date was 7th January 2014.
She is an author of both fiction and nonfiction books. Her work is based on a variety of subjects including weight management, nutrition, recipe books, and horror novelettes. But perhaps, she is best know for her Sherlock Holmes mysteries. She has had several of these mysteries produced into audio books and narrated by such celebrity actors as Mark Deakins, P.J. Ochlan, Barbara Goodson, Ian Whitcomb, Joey D' Auria, Simon Prebble,and Alex Hyde-White.
She also draws her own illustrations for some of her short stories such as in "Silence Be Damned" and "The EXCHANGE". Most of books have achieved the top 100 best seller list within the first week of publication.

She was born in the city of Sheffield in South Yorkshire, England. Shortly after graduating high school, she worked as a model and attended Shirecliffe College for Drama. Thereafter, she attended Stannington College for English, Art, Communication Skills and Photography. She then moved to London in her early twenties, where she studied and attained a career as a Beauty Therapist. She also obtained various certifications at DaneGlow International for slimming wraps and other deep heat treatments, and Thalgo Cosmetics for makeup (a French Company focusing on marine cosmetics). Her specialized skills include makeup, Swedish massage, reflexology, nutrition, diet and exercise.
She migrated to Florida in 1993, where she has been living ever since. Although her profession now-a-days is as a real estate investor and a freelance beauty consultant, her passion is writing, and she uses the knowledge she acquired throughout the years on various subjects to enlighten others.
She is the youngest sibling of three, including Anthony and Mark Cartawick.

Sherlock Holmes: The Ultimate Satyr Collection by Pennie Mae Cartawick contains ten of the author’s Sherlock short stories. There are some very good stories in this collection. In each episode, Sherlock Holmes and Dr. John Watson are pitted against seemingly insurmountable odds as they unravel murders, robberies and other crimes that baffle local authorities. Situated in various locales around the globe, Holmes and Watson combine forces to solve crime after crime, even though the good doctor generally has no idea what transpired. In this collection, you will find murder most foul, theft, robbery, forgery, lies, deceit, espionage, and plain old vanilla chicanery. You will encounter rare, ancient, authentic and inestimably valuable artifacts and antiques. You will come across missing persons, ghosts and, apparently, a living skeleton. You will even dodge a murderous turtle. You will not be bored.

Sherlock Holmes: The Ultimate Satyr Collection is an illustrious addition to the Sherlock Holmes collective, crafted by many authors hoping to emulate Sherlock’s creator, Sir Arthur Conan Doyle. These ten stories are creative, original and well-concocted. Cartawick has an admirable talent for devising authentic-feeling mysteries, worthy of the name “Sherlock Holmes.” These stories are unpredictable, with seemingly innocuous clues providing the linchpin Holmes needs to deduce a solution, much like Doyle’s own approach. Even the photographs and graphic images in this collection are above average. Cartawick is a name Sherlock Holmes fans will want to commit to memory, to ensure they do not miss a single upcoming episode. The Ultimate Satyr Collection is as good as it gets, outside of Doyle’s own work.