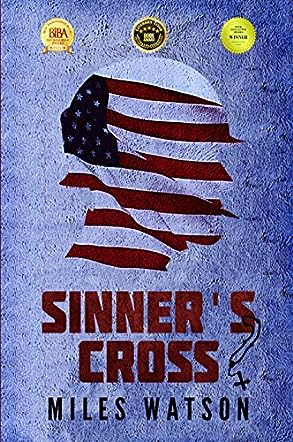 Miles Watson is the author of both the CAGE LIFE and SINNER'S CROSS book series, as well as the short-story collection DEVILS YOU KNOW, and the novelettes "Nosferatu," "The Numbers Game" and "Seelenmord." His works have collected over a dozen awards. He wrote SINNER'S CROSS to explore both historical and psychological aspects of the Second World War he felt had been neglected by both the history books and authors of fiction.

Sinner’s Cross: A Novel of the Second World War by Miles Watson is a no-holds-barred account of one of the lesser-known actions in Europe of the Second World War. Prior to the well-publicized and dramatized Battle of the Bulge in the Ardenne Forest, an equally violent and deadly encounter took place in the forests of Hürtgen on the German/Belgian border, from September 19, 1944, to February 10, 1045. American and German troops faced each other in the dense forests of Hürtgen as the winter of 1944-45 descended, where the flower of both country’s youth was sacrificed in a futile battle over an unknown and unwanted piece of land. The author introduces us to both sides of this titanic and bloody conflict. Half the story is dedicated to a group of American G.I.s led by the inexperienced and terrified Lieutenant Breese, facing off against one of the most formidable of Germany’s units, the Paratroopers, led by multi-decorated and seemingly fearless Major Zenger, affectionately known to his troops as Papa. The author takes us deep inside the psyche of these terrified, mud-splattered, and intensely uncomfortable men as they prepare, yet again, for a counter-offensive, which like so many of them seems rooted in both pointlessness and failure. In this maelstrom of battle, blood, and gore, each man must face up to his own personal demons, fears, and horrors and either overcome them or walk away.

Sinner’s Cross is without a doubt one of the most powerful anti-war novels I have ever read. Miles Watson’s incredibly descriptive narrative takes us right into the infernal “hot zone” of the battle and describes the actions and the reactions of the soldiers with sharp, incisive, and incredibly descriptive prose. It is powerful and compelling, as much as it is sickening. What I particularly liked about this book was that the author showed the battle from both sides of the fence. His description of what occurred in the mind of Major Zenger was a clear attempt to remind us that the enemy soldiers were just human beings long before they were Nazis. The German troops were just as horrified, terrified, and tired of the endless battles as the Americans. He did a wonderful job of outlining the different perceptions of war from the psychological makeup of each individual soldier, his needs, wants, and fears. No-one can possibly read this book and conclude that war is, in some way, heroic or worthy of honor. The reality is clearly displayed in the crushed, broken, dismembered, and devastated bodies that would forever lie in the forgotten forests of Hürtgen. A truly powerful novel but one that left me drained by the end of it.