Violation, Seduction, and the President of the United States
by Mark Reutlinger, writing as M. R. Morgan
Fiction - Womens
364 Pages
Reviewed on 05/14/2018 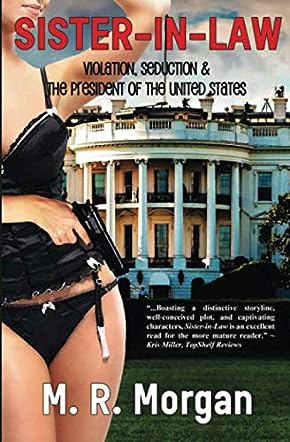 A quick look at the cover of Sister-in-Law by M.R. Morgan does and doesn’t give you the full picture of just what goes on between the covers. Sure, it’s obvious the plot involves the White House and sex, but if you think this is going to be one salacious graphic read, it isn’t. In fact, in many respects it’s a sad love story, written in an easy-to-read style that is rather touching and with a plot that initially seems rather implausible. But then, maybe such a plan to destroy a president-elect’s future could be hatched if all the right people and enough money were involved.

What does the plan involve? It involves a high class call girl, Suzanne, being paid megabucks to attract, enchant and somehow get the president-elect’s brother, Adam, a professor, to fall in love with and marry her. Easier said than done, right? And if Suzanne succeeds, what then? Well, that’s the second part of the plan. Once part of the White House family, Suzanne is then expected to seduce the president and bring him tumbling down in scandal. Suzanne has all the attributes needed for a job like this, and, apart from the monetary reward, she has the motivation: as a child, she was raped by her father. Naturally, she has no great love nor respect for men. Why not bring them down just as she was brought down? What she doesn’t bank on as she moves closer to the deadline for getting the deed done is what the reader won’t expect either. In short, once we get past reading how Suzanne even got into the escort business in the first place…which takes up a good portion of the novel…the plot moves along quickly and leads to both a surprise and satisfying ending.

One Amazon reviewer of Sister-in-Law was disappointed that the author spent so much time on Suzanne’s background before getting into the nitty-gritty part. Others might feel likewise as it does slow down the pace a bit after just getting into the plot. But on the other hand, Morgan does a good job of demonstrating why and how a beautiful girl might end up earning a living by using her beauty and body. For those interested in people and understanding why they do what they do, this backstory is actually rather interesting. Incidentally, that same reviewer said she ended up not finishing the book. My only comment on that? That’s a shame. The reviewer missed out on a good read!