Somewhere Along The Way 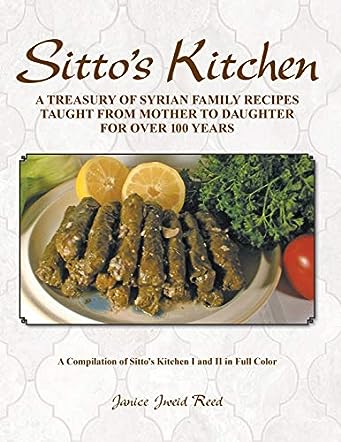 I grew up in the vibrant and diverse community of Syrian and Lebanese families in Paterson, New Jersey. It was here that I was steeped in the foods and Arab cultural traditions that my own grandparents had brought with them from Aleppo, Syria.
My grandmother, Naima, had arrived through Ellis Island as a Syrian immigrant in 1912 and later built her life with my Syrian grandfather, Bashir in 1915. All of the traditions, our culture, foods, religion and Arabic language were gifts given to our family by their nurturing spirit.
My young life took on a very ethnic childhood and adolescence, immersed in our Syrian community. I didn’t realize it, but many years later, this had a profound effect on me.
In 1966, I started compiling my grandmother’s recipes in a little spiral notebook. I knew that these Syrian foods would be something I needed to record. As I grew up and married, I consulted with my Sitto on this or that recipe. Even while living in the Midwest with my own young family, I’d call her for recipes or tips on what I was trying to do. I knew these dishes well, but the actual cooking or baking of them was new to me. No written recipes were ever created as Mothers traditionally taught their daughters these kitchen secrets through the generations. These cooking treasures, taught to my grandmother in Aleppo, Syria, comprised more than 100 years of traditional Arab cooking. Thus, my cookbook, Sitto's Kitchen, became my goal.

We tend to take for granted what we enjoyed in our youth: time spent with grandparents, learning Grandma’s traditional recipes, and pottering about together in the kitchen. There is love involved in the making of food, the serving of it, and the enjoyment of eating it. There are also lots of stories: where the recipe originated, why the food was a staple in a specific traditional, cultural dish. The recipes, the memories, and the stories are well worth sharing, not just for future generations within one’s family, but for others to enjoy as well.

Janice Jweid Reed’s book, Sitto’s Kitchen: A Treasury of Syrian Family Recipes Taught from Mother to Daughter for Over 100 Years, is more than a cookbook. It’s a collection of family memories soaked in the creation of traditional Syrian foods. I love the way the author introduces Sitto, Arabic for grandmother, and her origins in Aleppo, Syria, a thriving community now devastated and left in ruins by the ongoing strife in Syria. The author continues with a short biography of her grandmother, who moved to the United States as a young teenager. Later, the author explains how she, as a teenager and later a mother living across the country, far from her family, would listen and learn about traditional Syrian foods, jotting things down in a spiral notebook. Her jottings developed into this cookbook/memoir, a treasury of good food and family times.

After the insightful introduction, the author has arranged the recipes into the usual categories one would expect in a cookbook. Each recipe has the ingredients clearly listed, and the method of preparation presented in an organized fashion. Most recipes are accompanied by a photograph of the finished food, along with the author's side note about the food, its origin, and the times she enjoyed preparing the food alongside her grandmother in Sitto’s kitchen. A wonderful treasure full of recipes and stories.