Both Sides of the Border Bradley and the Dinosaur Sleeping Through the Nightmare 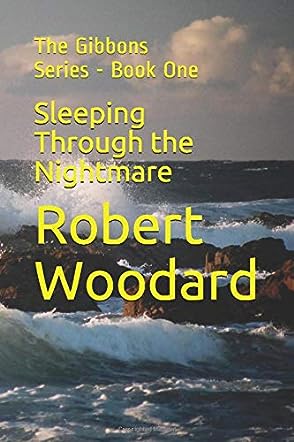 The idea of Sleeping Through the Nightmare came to me after reading the book The Road. It got me thinking about what it would be like to be in a world where you believe you will be the last human to walk the earth. While writing it, I fell in love with the characters and decided to keep their story going and the Gibbon's series was born. I wanted this story to sound true to form to give the reader a feel for what it might be like to live at the tail end of a true biological disaster. It was a challenge to write with people, ages and personalities for each one that enters throughout the four volumes.

I am a fiction writer of science fiction, adventure and crime dramas. I reside in Tacoma Washington.

Robert Woodard pens an adventurous dystopian novel in Sleeping Through the Nightmare. Pete Gibbons wakes in pain and is extremely cold, with no idea where he is or what has happened. As his mind and body begin to thaw, Pete recalls working at a top-secret research facility in the middle of the Arizona desert. He was an engineer working on the development of a Cryogenic Unit. When Pete had completed his work, he was asked to become the first human test subject. He was placed in the chamber and remembers little after that. With regained awareness of his plight, Pete exits the room and soon realizes he has slept through the devastation of humankind. Everyone is gone, leaving only the skeletal remains of the life he once knew. Meanwhile, April lives on a sailboat with her parents. They are the sole survivors of their group. A deadly virus eradicated the world’s population long before April was born, and all April knows is the ocean. She and her parents, Gus and Barbara, land from time to time to gather whatever supplies they can find. They have never seen any “land people.” April fears that one day she will be the sole survivor of humanity. As time goes by, Pete learns to live off the land, and April continues to sail the sea. Both are desperate to escape loneliness, and Pete and April wonder if there is someone else out there to fulfill the longing of their hearts.

What happens when a time-forgotten landlubber and a young creature of the sea meet? No, this is not a revised version of The Little Mermaid. Far from it, Sleeping Through the Nightmare, penned by Robert Woodard, is no fairytale! It contains both adventure and suspense, hopeful and fearful in equal measure. It is sentimental and heartbreaking, but most importantly, it is the end of what we know and the beginning of the unfathomable. The narrative captivates you from the beginning to the end. Woodard’s vivid descriptions invite the reader into the setting. The world as we know it is gone: these characters are born and raised in different times and placed into diverse backgrounds - the land versus the sea. The characterization is as unique as the setting. Both main characters are internally conflicted, each vulnerable, believing they will be the sole survivor of humanity. Yet, they both press forward into an unknown future, with an innate will to survive. Pete has dogs to keep him company (which I loved), while April has her parents, but for how long?

The plot climaxes when the land and the sea meet. When Pete's and April’s lives collide, the story intensifies. The self-taught, strong-willed, feisty sea woman challenges the innovative, hard-working, yet easy-going, century-old landlubber. The loyalty and companionship of the dogs and the adoring understanding father figure aid in the growth and relationship of the main characters. As the story ends, the reader is left satisfied yet anticipating what is to come. Robert Woodard’s Sleeping Through the Nightmare was an engrossing reading experience.

The experience of reading Sleeping Through the Nightmare - The Gibbons Series: Book One by Robert Woodard made my day. It started with an intriguing concept: what if you were the last living human on Earth? How could that happen? The answer is to imagine a pandemic that wiped out the entire human race, except for one man in a cryogenic suspension chamber. A chamber that kept him alive until the solar-powered batteries ran down, over a hundred years later, triggering the automatic process to wake him up. He walks around a deserted building, disoriented, until he finds a letter addressed to him, explaining what happened. Determined to survive, he wanders through the empty and decayed streets of a ruined town, restoring a pickup truck that he loads with supplies from abandoned stores. He drives across the US, ending up on the Pacific shore, and eventually meets two other humans – a man and his daughter. They are the only survivors of a sea-faring group of escapees after their boat finally sank. Will they be able to survive alone in a dead world?

What made this gripping end-of-the-world story so special for me was the total absence of human evil. The trio had plenty of fights on their hands against nature and wildlife, but no human evil stuck up its ugly head, to my great relief. Sleeping Through the Nightmare was a what-if style book that kept my mind active throughout as I watched the characters' intelligent reactions to unexpected setbacks and wondered how I would solve the problems they encountered. The three characters were very clearly described, their motivations and reactions completely believable. The evolving dynamics of the trio’s relationship are wonderful to watch. Robert Woodard has incredible attention to detail about the exact way they solved their problems, and it kept my interest high, following every move they made. Sleeping Through the Nightmare and the subsequent series will appeal to anyone who has ever thought about living on their own, away from the safety and comfort of the civilization that we take for granted.

Sleeping Through the Nightmare is the first book in The Gibbons Series by Robert Woodard. This moving tale is awash with pathos, exploring the solitude of two elaborately crafted characters as they navigate a desolate world. When Pete agrees to be used as a test in a scientific project, run in a cryogenic suspension chamber, he believes he will be in there for only ninety days. Little does he know that it will be more than a hundred years before he gets out of there, emerging into a world that looks barren, with the human population completely annihilated by an uncontrollable virus. He is alone in the world, or so he thinks. April has lived aboard a sailboat at sea for twenty-two years where she, like her parents, was born and raised, afraid to set foot where the deadly virus ravaged humanity on land. With her parents dead and her sailboard giving way, she finds herself alone, the last survivor. The meeting between Pete and April sets off an adventure that discusses resilience, humanity, survival, creativity, and hope.

Sleeping Through the Nightmare is a gripping story that should be made into a movie. The writing is cinematic, plus author Robert Woodard's eye for detail and his ability to write raw emotions into the characters are just fascinating. The story reads like the intercourse of land and sea, taking readers back to the beginning of human civilization, to the time when life had just begun. The two protagonists are written with rich backgrounds and the themes of survival and nature are very relevant to contemporary readers, paired with strong hints of the painful sense of loss and the fear of becoming a victim to a mysterious virus. The prose is beautiful and the terrific descriptions add a deeper layer of beauty to the narrative. Sleeping Through the Nightmare is a realistic rendition of what can happen when care is not given to the environment. An expertly written story with the potential to hold readers spellbound whilst also inspiring serious reflection on issues like climate change and pandemics that threaten the human race. It is well-plotted, fast-paced, and emotionally engaging.