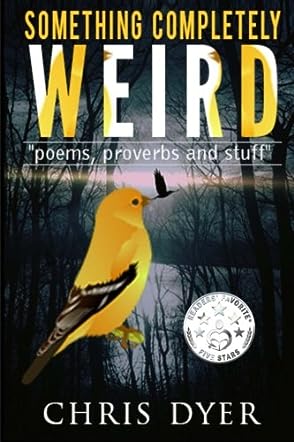 Something Completely Weird: Poems, Proverbs and Stuff is a poetry collection written by Chris Dyer. Dyer is a lifelong horse enthusiast and herbalist, as well as an author of fiction, non-fiction and poetry. In this collection, he includes an introduction in which he shares his philosophy on life, religion and our place on the planet. He also discusses the extraordinary difference that small individual acts of goodness and kindness can have on the world and its inhabitants. Collectively, they can be a life-changing force as he illustrates in his discussion of what would happen if each person gave a penny a day -- just one penny. His poems are predominantly free-verse in form, and many of them continue with his theme of dealing with others in an ethical and caring manner. Nature, the environment, and our role as protectors of the planet are also themes in this thought-provoking collection. Some of his poems form riddles for the reader to solve. In No More, Dyer argues against that form of political leadership which relies upon bluster and oppression of others: “No more sabre rattling, no more blood,/No suffering of children,/We will not stand it,/It has no reason other than greed,/For your own selfish aims of power.”

I had previously read and reviewed Dyer’s mystery novel, Sting in the Tail: Book One, The Rocket Series and his book on equine herbal remedies, Plants, Potions and Oils for Horses, and was pleased to have the opportunity to review this collection of Chris Dyer’s poems. Like those other two books, I found myself most impressed with the way the author communicates his message to his readers. Dyer cares very deeply about the environment, the interconnectedness of humanity with those other beings which inhabit this planet, and with our individual places in the scheme of things. Each poem is thought-provoking and sincere, and each of his proverbs has a ring of truth. I especially enjoyed the flash fiction piece, Lightning, which, while a scant three paragraphs in length, is a powerful and compelling work that immerses the reader in the story of a man and his horse. Dyer’s poetry collection, Something Completely Weird: Poems, Proverbs and Stuff, is most highly recommended.