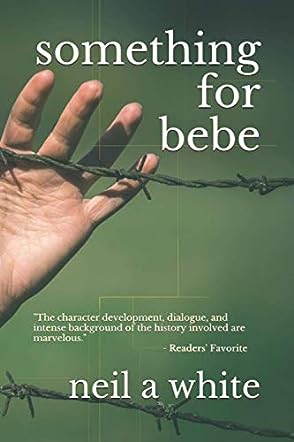 Neil A White was born in Melbourne and educated in his native Australia and the United States. He is also the author of the novels; Closure, Turn A Blind Eye, and a number of award-winning short stories. He and his wife live in Dallas, TX.

Something for Bebe by Neil A White is a well-written thriller, geared for young adults. Maddy Holt is barely out of high school when her beloved friend and mentor retires. She owed him for taking a chance with her and paving the way for her among their co-workers. When he doesn’t answer her calls, she discovers he has left the country and could be the one behind a string of deaths. Pairing up with Grant Stanhope, they set out across a Balkan country to find Elliot Kruger and stop the killings. Things don’t go as planned in a country that hosts three political leaders and praises their heroes no matter their crimes.

I found Neil A White an author that ignites compassion and a drive for justice. Something for Bebe is fiction, but borders on truths that bound a nation riven by wars within and without. Former Yugoslavians are a forgotten people torn by the politics of countries who had forced their way into their lands, leaving fragments behind in the next takeover. When a new power comes into play, the villagers of opposing beliefs must flee. Many doubt their fellow neighbors could harbor ill against them, and that is the foundation of this amazing novel. The author skillfully kindles a malicious act against one family that detonates decades later. White opens our eyes to the war crimes of prisoners that the world ignores. Overall, I finished reading in awe of the skill White uses in well-illustrated scenes to make you feel as if you stepped into Bosnia. The character development, dialogue, and intense background of the history involved are marvelous.