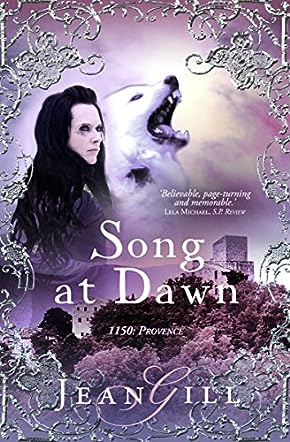 Song at Dawn: 1150 in Provence (The Troubadours Quartet) Book 1 is a historical fiction novel, the first in a four-part series, by Jean Gill. Set against the background of political and religious power struggles in twelfth-century France, it follows the adventures of a sixteen-year-old young noblewoman trained as a troubadour, who fakes her own death to flee an abusive home. Adopting the “stage name” Estela de Matin, she ends up by the roadside in a muddy servant’s dress, carrying only her instrument and accompanied by a large white dog, just as Aliénor (Eleanor), Duchess of Aquitaine and Queen of France, happens to ride by. Hearing Estela sing, the Queen invites Estela to join her retinue and continue her training as a troubadour, beginning an action-packed adventure of mystery, betrayal, political intrigue, murder, jealousy, and romance.

If you like historical fiction with a full cast of characters who don’t always turn out to be what they seem, who have hidden agendas, and show no hesitation at deception, murder, or torture to get their rivals out of their way, you’ll like Song at Dawn. Gill writes in an engaging style that moves along at a good pace and keeps you on the edge of your seat. I found Estela a sympathetic character, intelligent, talented, and courageous; though I could have done without a particular visit to the stable. That said, I found myself eager to read the next books in the series, to see what happens in the years ahead to Estela and to those who have become important in her life.