A Christmas to Live For

A Christmas to Live For Spiritual Truth in the Age of Fake News 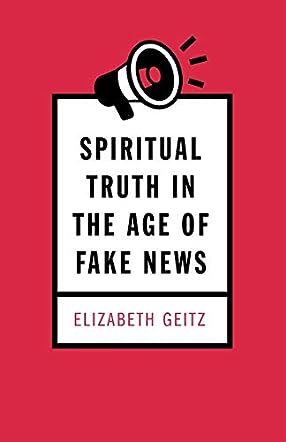 Elizabeth Geitz is an Episcopal priest, nonprofit entrepreneur, and award-winning author. With a focus on spirituality and justice issues, her writings speak to people of passion who want to make a difference in the world. Her books have been hailed by NY Times bestselling authors Desmond Tutu, Helen Prejean, and John Berendt.

In her newest book, Spiritual Truth in the Age of Fake News, "Elizabeth Geitz pulls no punches as she calls us to move beyond the many 'isms' that plague our culture today, to read the Scriptures with eyes wide open, and to commit ourselves again to loving all our neighbors with no exceptions." MICHAEL B. CURRY, Presiding Bishop of the Episcopal Church

Spiritual Truth in the Age of Fake News by Elizabeth Geitz is the kind of book that keeps you engaged whether read in one sitting or one chapter a day. Every lesson addresses the deepest truths that most of us have never bothered to contemplate in our busy lives. This book is a collection of short essays that delves into biblical passages that have been tragically misinterpreted and used to advance agendas of self-interest. With a keen observance of social justice and inclusion, Geitz goes deeper into interpreting scriptural context to counter-argue how their misinterpretation has become a source of fake news as erroneous dialectics of organized religions, civic, and social groups. As fake news proliferates, it’s appalling to discover that it all began when people first interpreted the Bible for their own gain, particularly in advancing their prejudices and biases resulting in the marginalization of people based on race, gender, and religion.

Elizabeth Geitz’s essays drive us into critical reflection as she discusses scripture's meaning and context. Establishing connections with the reader through personal accounts and experiences, her insights provide a welcome, fresh perspective. Spiritual Truth in the Age of Fake News secures not only greater justice for women, but for everyone who has been misrepresented by traditional biblical interpretation. In addition, Geitz points to authentic Christian feminist insights in the Bible. It cannot be denied that traditional religion, particularly that of the Judeo-Christian tradition, is overtly masculine. However, Geitz intelligently presents it in a way that does justice to the proper representation of women who are equally made in the image of God. Regardless of your religious orientation, you’ll find that this book offers precious insights on human dignity and equality.