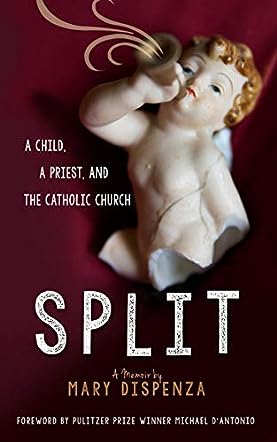 MARY DISPENZA is a former
Catholic nun, educator and National Distinguished Principal. She is an activist for equal rights and for the protection of children and the Northwest, Regional Director for SNAP, Survivors Network of Those Abused by Priests. Mary has been featured on KUOW, Public Radio, and KOMO and KING TV in Seattle. Mary’s articles and opinion pieces have appeared in CNN Opinion, The Seattle Times and The Los Angeles Times. Mary is the author of SPLIT: A Child, A Priest, and the Catholic Church. She lives with her spouse in Washington State.

Split: A Child, A Priest, and the Catholic Church by Mary Dispenza rocked my world for two reasons. First, I attended Catholic schools till I was 18; second, I was, like Mary, a victim of child sexual abuse. But if Split rocked my world, it might just turn the worlds of millions of devout Catholics upside down. Those are the followers who still deny, or refuse to believe this could be happening, despite all the reports of childhood abuse by priests, not to mention the Church's failure to protect innocent children by removing such predators from places where they will still have contact with youngsters.

It is just such a story that Mary Dispenza shares with us in Split. Molested...no, let's use the right word...raped repeatedly by Father Rucker from the age of 7, Mary split in two psychologically. She was well into her 30's or older when she began to recognize why she was incapable of loving and/or having sexual relationships without feeling shame. When she finally came to grips with what had happened to her at such a young age, and just who had abused her, she barely survived the realization. Only her faith in God and the support of a woman she came to love in every way helped her go to court and speak out against Father Rucker. In doing so, she brought some measure of justice and peace, not just to herself, but to 30 or more other children abused by Father Rucker.

I couldn't put Split down. I breathed a sigh of relief at the end in finding Mary had found some measure of peace and forgiveness in her heart after all she went through, both as a child and an adult who lost jobs and almost became penniless because of religious intolerance of sexual preference. But what I couldn't help thinking as I closed the book was "is the cover up of sexual abuse by the religious limited to the Catholic church?" Unfortunately, I think not. The Catholic church is easily singled out because priests are celibate. But I feel sure that such practices, both the abuse and the consequent cover up, are rampant throughout all religious groups and institutions.

Kudos to Mary Dispenza for writing this painful memoir and expose. We need more brave women...and men...like her telling the world how it really is! As I have said in my own talks on sexual abuse, “victims' voices are the best weapons against sexual abuse.” Let’s not silence those voices any longer.

Split: A Child, A Priest,

Thank you, Viga for this review. You have done a great job in capturing the essence of Split and the long journey to healing. I know you are correct - there are many more survivors from clergy abuse in different faith communities - not just Catholic, and little by little a SPOTLIGHT is shining on them, too. Please see the movie, Spotlight to understand the cover ups and extend of priest/clergy sex abuse. Again, I thank you for spreading the word about SPLIT.