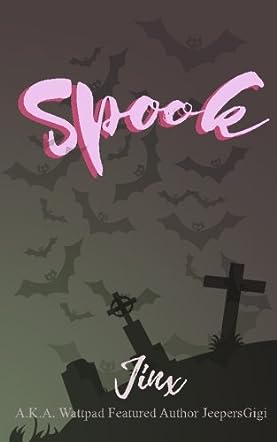 Spook is the first book in the Get Spooky series. It tells the story of paranormal investigator, Daphne Fitz, who believes in ghosts, demons, and pretty much everything but aliens—maybe. After all, the line needed to be drawn somewhere! Having just received her online parapsychology degree in the mail, Daphne decides to put her knowledge to work. At a crossroad in Ligonier, Indiana—one that is closest to her trailer—she summons crossroad demon Rakkason. (Much to his vexation.) Intrigued by Daphne’s haphazard ways, Rakkason indulges her request for an interview and the two end up bantering like old friends. Things go awry as Rakkason is summoned back to hell and Daphne finds herself dead. The now definitely dead Daphne finds herself in Spook, a sort of crossroads of the spirit world—not heaven, not hell, but a place where all types of monsters co-exist. Daphne takes to being dead like a duck to water, which isn’t all too shocking considering that she was an outsider while she was alive. While in Spook, Daphne befriends the relocated Rakkason and his boss Ace, Harper (a werewolf), and Chance (a ghostly cowboy). Together, Daphne and her ragtag crew of supernatural friends work toward saving the town from a curse. Will Daphne and her friends be able to save Spook, or is this the end of the afterlife as they know it?

Jinx’s debut novel, Spook, left me laughing, crying, and laugh-crying. It was so much more than I could have expected—a story of love, friendship, and learning to be yourself presented beautifully in this paranormal YA novel. Reminiscent of childhood favorites like Scooby Doo, Goosebumps, and Halloweentown, Spook is appropriate for a wide range of ages. I would recommend it for readers ages 8 to R.I.P. Gen X-ers will appreciate and get a good giggle out of the references to Depeche Mode. Daphne and her motley crew of friends are the meaning of #friendshipgoals. Although they come from different backgrounds (really, they could not be more different), they stick together through their trials (literally—they go through quite a bit to stop the curse) and tribulations. It is incredibly heartwarming seeing the character growth from beginning to end. Daphne, a full blown awkward turtle, finds herself and her self-esteem as she realizes her self-worth over the course of the book, aided of course by her newfound friendships, and her budding relationship with the charismatic demon Ace, son of the best friend of the Big Red guy himself! (I’ll be the first to admit I caught #Dace feels right away because his love for her is as pure as it gets—for a demon, of course.)

As you read Spook, you feel a sense of closeness to Jinx’s characters, as though they were your own friends. You’ll laugh, cry, and laugh-cry with them as I did. I loved Spook for its great storyline, the amount of fun I had while reading it, and the fact that once I was done I immediately wanted to read it again to catch up with my old friends—Daphne and crew. You know a book is good when you immediately feel a sense of sadness upon completion. To find out more about Daphne and friends, and whether they defeated the curse (or not!) you’ll have to read this book—you won’t regret it!

This is one of my favorite books! I'm so ecstatic to see that it received a 5-star review from Readers' Favorite.

OMGOSH! i can't get enough of SPOOK! Can't wait to read the next books in the SPOOK series, DEARLY DEPARTED & HAUNT! Obviously perfect for fall/Halloween time yet I'll be reading these wonderful books year round! please please more Jinx! you are FANG-TASTIC!