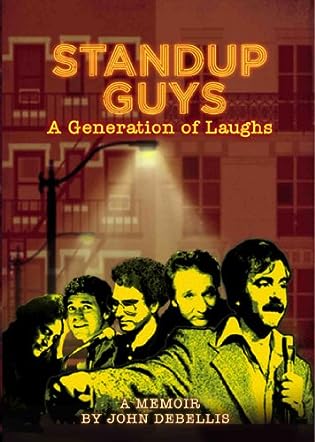 Ever heard a joke that you enjoyed so much that you had to share it? Then, when you tried to emulate the way it was told to your listeners, family, friends or co-workers they looked at you blankly or shook their heads - you BOMBED! According to John DeBellis, this is an example of what comics experience continuously. Why would anyone in his right mind expose himself to such devastating pain? John’s hilarious depictions of he and his comic cohorts give ample proof that none are sane. Their individual neuroses and (for some) borderline psychotic behaviors are told in anecdotal fashion as you meet them all. John doesn’t go into any deep psychological analysis of the need to get recognition by being funny, but you are reminded of Red Skelton’s tragic clown persona. Each works out, not always successfully, his need to be accepted on his terms as each finds the format and style that fits his personality. John is almost always kind and aware of the lengths each goes through on his journey to self expression. His detailed descriptions of incidents were, at times, a little too much for me, but the humor and affection for each balanced it out. It is the camaraderie and unselfish love between them that makes the book such an easy, delightful read. He does emphasize that their group was unique and that nowadays, in the cutthroat world of comedy, it would be difficult to duplicate their experiences.

John DeBellis has “made it” as a standup comic and as a comedy writer, but he has written a story of friendship that goes beyond any profession or discipline. His story demonstrates what many young couples relate about their difficult struggles in the early years of their marriage. It created the bond that carried them into more comfortable lives, but overcoming adversity is its own reward. John retells the happiest times of these comedians’ lives - before they were famous. Good job, John.