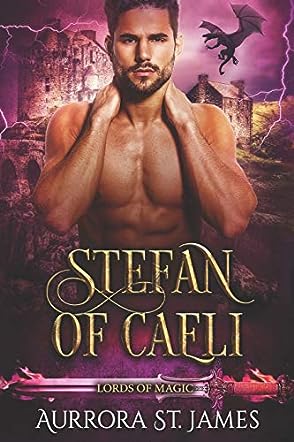 Aurrora St. James is the author of sexy romances. Her second book, Gavril of Aquina, received Honorable Mention for the 2015 RONE award for best fantasy/sci-fi romance.

As a teen, she started reading her mom’s romance novels and developed a love for the happily ever after they promised, sexy heroes and the heroines who always got into too much trouble. Now she loves to incorporate all that magic and mayhem into a story where love can overcome anything.

Aurrora St. James's Lords of Magic Book 2: Stefan of Caeli is filled with intrigue, hidden secrets, and romance. Stefan Baudin, twin to Nikolai Baudin, King of Semar, has lived in the dark concerning his mother and her heritage. He hopes that on his quest to find her he will get answers about the fateful night she left. What he finds is so much more. Isabela Florin is the first female in the Caeli Guard, looking for her father's approval of her achievements. When it seems that even a place in the Guard is not good enough, she aims higher. She aims to be the Keeper, and the one sure way to get there is to work hard enough so that the Sentinel will look past her being a woman. The opportunity arises, but does she have what it takes to carry out his orders?

While I did not read Book 1 in the Lords of Magic series, I did enjoy Stefan and Isabela's story. This story is also tied into his brother's story in the third book. This book was full of dragons and magic. What piqued my interest were the action scenes in which dragons were fighting each other and each had unique abilities. While in most dragon stories, the dragons all have the same abilities or abilities depending on color, it was nice to see that those were not the defining qualities for these characters. The characters themselves also were flirty and had their witty moments as well as intense heart wrenching moments. While the book started off slowly, it gained momentum further along. I will be looking forward to more works by Aurrora St. James.