We All Have Sacred Spaces A Troll Walks into a Bar 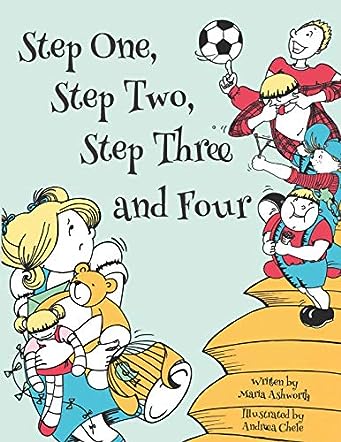 Ms. Ashworth’s has written three picture books. She’s been featured on Fox News in Houston, Houston Chronicle, NPR and one book will be in children’s theater in Katy 2017. Ms. Ashworth volunteers at the local libraries acting as President, as well as a Member-At-Large. She is a long-standing member of the Society of Children’s Book Writers and Illustrators. She’s published a handful of short stories through literary contests and women’s anthologies. When she’s not writing you can find her pumping iron at the gym or digging into a pint of ice cream. She lives with her family and a very needy cat in Texas.

Step One, Step Two, Step Three and Four by Maria Ashworth is a beautifully written and illustrated children’s book about co-mingling families. One day a mother told her daughter that she was getting married. Her daughter began to wonder if she would have to share her mother? Would the special times they once shared vanish? She didn't like these thoughts one bit. Maria takes us on a journey into the thoughts of the child as she begins to visualize how having additional people, whether it is brothers or sisters, would drastically affect her world. She didn’t want any step brothers or sisters; she wanted her life back the way it was. She not only didn't want them in the house, but she had named them Step One, Step Two, Step Three and Four. She even made some rules for them, from don't talk to her to don't touch her things. But one day something changed all of that.