Storm at the Keizer Manor 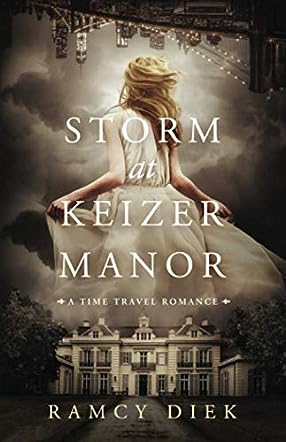 Thirty years ago, I fell in love with the United States while traveling around in an Oldsmobile station-wagon with my husband. Together, we visited all the amazing northern states and landed in California where we got stuck for five years.
Eventually, we continued our travels with our two small sons, went back to the Netherlands where we are from, and finally found our way to the Pacific Northwest. We built up our business, and raised our boys into amazing young adults with their own careers. During this time, I made a slow transition from reader to writer of contemporary, enjoyable, laid back, and romantic stories.
Even though my debut novel "Storm at the Keizer Manor" is about time travel, it shouldn't be classified as paranormal or science fiction. Instead it's about lovers, separated by time, who try to reunite. You won't be able to put it down after the first chapter.
Right now, I'm working at rewriting my second novel, Eagle in Flight, and hope to publish it in November 2019.

Outlander meets art in Storm at the Keizer Manor by Ramcy Diek. Annet, a pregnant woman from the 21st century, finds herself in the 1800s after she had gone for a walk in the dunes with her boyfriend, Forrest (the father of her unborn child). A storm had surprised them, and apparently transported her - but not him - back in time. Unfortunately for Forrest, some people became suspicious of him because he had last been seen having an argument with his girlfriend. Part of the novel concerns itself with his search for Annet, but the majority of the novel is about how Annet deals with life in the 1800s, and how the outspoken woman who loves to swear and carries a child out of wedlock ends up in a monastery of all places. Initially, Annet thinks it's all a prank, but then she meets the 19th century master painter Alexander Keizer, whose paintings are exhibited in the museum she work for, and who should be long dead. Annet accepts her fate, but wants to find a way home. However, the longer she stays in the past, the more she learns about what has been going on in her life, and what she really needs for happiness.

Readers who love time travel romances, Outlander for example, will feel right at home in the pages of Storm at the Keizer Manor by Ramcy Diek. The novel is not as rich in history as the Outlander series (which has a bit too much of everything for my taste - too much sex, too much history, too many long, winding passages that say nothing at all), but that's not a bad thing. Readers will learn quite a bit about industrialization, especially when it comes to sewing and the sewing machine. The main focus, however, is not on history, but on the development of Annet. I found the novel to be a very pleasant experience and it was also exciting in a certain way. There is, obviously, some romance going on, but it's not over the top, and naked bodies are clearly not the selling point of this novel. It has substance, and I found the ending rather satisfying. I was hoping it would end that way! It's not a taxing read, and ideal for comfortable reading sessions at the end of a busy day.

Storm at the Keizer Manor was a fantastic read. I'd never considered myself much of a romance reader before this book and I can now consider myself a changed woman. I wouldn't expect to relate to Annet, modern "twenty-first-century" woman the way that I did. All of Ramcy's characters are unique and deep, you either love them whole heartedly or hate them bitterly. For me, it's wonderful to have that sort of emotion, love, and hate evoked with a character.

The story itself was rich and detailed. It was a smooth and wonderful read that left me begging for more each time I tried to put the book down. I had several days where I was reading well into the night to finish "just one more" chapter that never turned out to be "just one more". The book had pleasant twists and turns and surprises at every twist and turn. It's a long read, but it's definitely worth it.

Debut novel Storm at the Keizer Manor is one of those books that you initially read too fast because you can’t wait to find out what is going to happen next. Racing through the book I kept telling myself the whole time to slow down because I knew I would be sorry to see it end.

Annet and Forrest are sympathetic and well rounded characters and the idea of time travel I always find intriguing. Throw in some romance and historical fiction and you end up with an unusual and fun concept. Great plot twist and turns all come together nicely in the end.

This book deserves to be read again just to pay more attention to all the rich detail the second time around.

Already looking forward to your next book Ramcy Diek!

I was riveted by this story of Annett and what happened to her after the storm! I appreciated the strength and tenacity she represented in the her character. I was sad when it ended and loved how the author tied it together. Would have loved more of Annett’s story only because I didn’t want it to end.

While I thought the author would lose me after the storm, she continued to entice me into each new chapter, ultimately weaving the tale into an unexpected, but satisfactory conclusion. Nicely done.

This is a quick read because the author has a laid back friendly writing style that readers are going to love. Annet Sherman is twenty five and living with boyfriend Forrest. Annet works for the Keizer art foundation, a place that houses paintings from nineteenth century painter Alex Keizer. During a strange storm, Annet is lost and awakes to find herself thrown back in time and unbelievably meets the man whose pictures she saw everyday in her job. The author has taken the idea of time travel on a fun, and interesting avenue. I found the book well written and intriguing. I think this author is one to watch.

This is a phenomenal book that will keep you captivated until the very last sentence, and at the end you'll be slightly sad it's over. Although the novel is somewhat long, it reads very nicely and is definitely a page turner. I dedicated myself to this book over the weekend and I found myself struggling to stay awake in the wee hours of the morning, not wanting to put it down.

The main characters, Annet and Forrest, are high school sweet hearts who are living a fairly normal life when they suddenly find themselves to be expecting parents. As Annet struggles to deal with the news of the pregnancy, she continues to work at the Keizer Manor, preparing for the 200th year anniversary celebration. On the evening of the celebration, Annet and Forrest leave the festivities for a short walk in the sand dunes. They find themselves amidst a terrible thunderstorm, unlike any they have ever seen. After the storm has subsided their worlds are turned upside down in a series of dramatic events.

Quick witted and independent Annet finds herself in the 19th century, frantically trying to find her way back home. The sweet and doting Forrest is left in modern times frantically searching for the lost Annet. As both characters endure pain, suffering and heartache the reader is constantly cheering them on, hoping they'll find themselves back together at the turn of the next page.

As time goes on and their circumstances remain the same, relationships are formed with new friends and lovers. The reader becomes torn - happy that the characters are forming new bonds, but somehow still caught up in the lost relationship between Annet and Forrest. By the end, the story comes full circle and the reader will be left feeling happy that everyone wins in this love story!

Ramcy Diek is an amazing author, who knows how to grab an audience's attention and leave them wanting more. She definitely has a way with words and throughout the story she paints a wonderfully detailed story - one your 5 senses will easily pick up on as the imagery forms in your mind. This tale is full of twists and turns that will make you both laugh and cry. It's definitely a book worth reading...and recommending to a friend!

This book is definitely a page-turner. I read this without the benefit of reading a summary, so I had no idea what was in store for me. From the beginning of the book you think it's going to be a simple drama, but it turns into a time travel romance. There are many twists and turns throughout the novel. It was hard to put down. Anyone who loves romance and anyone who loves time travel will love this book.

Exciting kept me glued to the page, a must read!

I couldn't put this book down, and yet I've never been much of a fiction, romance or time travel books fan. I read mostly non-fiction educational books but occasionally I need a break from non-fiction and this was the perfect fit! It was worded so elegantly and in an intriguing and very believable manner. I was sad when it ended since I wanted to know more.

I'm not usually one for romance or time travel. But Diek artistically approaches these genres in a way even I can appreciate. She is clearly talented at both writing and story telling. I highly recommend this book.

Love it! My husband can't put it down