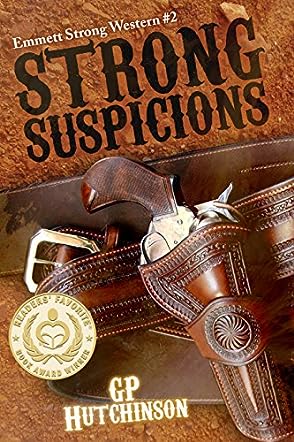 Award-winning author GP Hutchinson is a high school teacher who devotes as much of his attention as possible to the craft of writing. Hutchinson's passion for Westerns started when he was sixteen years old, when he wrote a research paper titled "The Cowboy in American Literature." His influences include artists Frederic Remington and Charles M. Russell, as well as Western authors Elmore Leonard and Robert B. Parker. Hutchinson, a father of three and grandfather of eight, lives in the upstate of South Carolina with his wife, Carolyn. He is a graduate of Louisiana State University and Dallas Theological Seminary who has also lived and studied in Costa Rica and Spain.

GP Hutchinson’s Strong Suspicions is the second and latest installment in his Emmett Strong Western Series. It traces the ongoing adventures of Texas Ranger Emmett Strong, his sidekicks, and his new Oriental bride upon their return to Texas after a bloody confrontation in Nevada. The action resumes in the shady border town of El Paso. Strong and his companions are assailed on multiple fronts. They are accused of a heinous crime that they did not commit and pursued by enemies old and new. With so many potential adversaries, it becomes impossible for Emmett Strong to trust anyone but his faithful wife and trusty sidekick, Juanito. The book is peppered with numerous tense encounters with various foes, and builds like a brooding symphony toward the final, dramatic confrontation with the treacherous enemy who was the mastermind of their El Paso troubles.

I am a huge fan of the western genre. I own a vast set of antique Zane Grey books and am still working my way through the stack. I know that Western fiction abounds and that there are numerous “cheesy,” predictable stories in print. Indeed, some are difficult to stomach. This, my friends, is NOT one of them! This work by Hutchinson is a most excellent addition to the genre. I couldn't put it down! I read it in two sittings in less than a day. It was THAT good!

The primary characters were already well developed from the first novel in the series. They were also believable. The dialogue was spot-on and easy to follow. And that dialogue was peppered with just the right amount of Wild West slang and Spanish. Any less and it would have seem less than authentic. Any more and it would have seemed contrived. The local color and language were absolutely perfect. The action was heart-thumping. The heroes were very believable and honorable. The editing and format of the book were immaculate. It was amazing!

I give this book a hearty five stars. I loved it. My only problem is that now I have to go back and buy book #1 to give me the full context of the action of this story. My recommendation: grab both volumes in the Emmett Strong Western Series now. You’ll have many hours of entertainment and escape to the wild streets of 1880s El Paso.