A Flower Among The Gold The Lords of the Wind Summer Seventeen and You 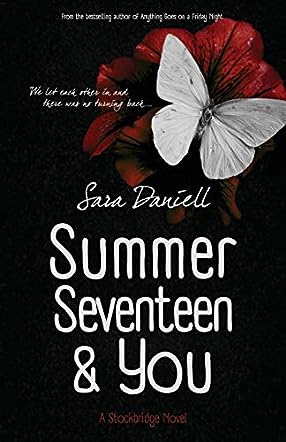 Summer Seventeen and You by Sara Daniell is a tender young adult novel about growing up, and learning who your true family is. Samantha “Sam” Scott is a young, wealthy teenager whose boyfriend, Logan Hart, is the star baseball player. But when a newcomer, Elliot Shaw, takes a coveted team position, Sam begins to loathe Elliot with a passion. Even so, the more time Elliot and Sam spend together, the more she realizes just how vain her hatred is, because all the while she is falling more in love with Elliot with each passing day. However, this love is put to the test when she finds out that she’s pregnant with Logan’s baby.

The relationship between Elliot and Sam was enjoyable to read about. I loved just how deeply their connection ran; it made Logan’s relationship with her seem so shallow and vain. Those appearances, however, became evident when she became pregnant with his child. The story quickly blossomed into a romantic, inspiring novel with Elliot and Sam at the center of it. The theme of surrounding yourself with people who love you is also incredibly strong. Sam’s parents had abandoned her, and when Logan tried to make it up to her, only to destroy her with rumors, anger, and betrayal, it was Elliot, Quinn, and Zach who stayed with her. She depended on them, and over and over again they stood beside her to the very end. Though others tried tearing them apart, to Sam, they were family, not just friends. It was this very aspect of the book that made the ending so bittersweet. From a light-hearted teenage romance to a beautifully tragic tale about a mother who sacrificed herself so that her daughter could live happily, Sara Daniell weaves a deceptively innocent novel about surrounding yourself with loved ones who support you and care for you in any way they can.