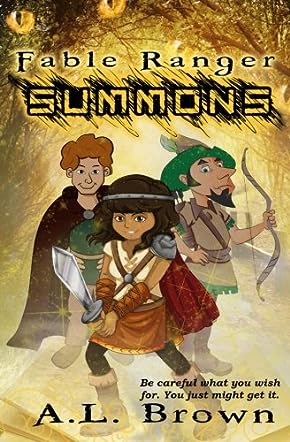 Born and raised in Little Rock, AR, A.L. Brown now calls Central Texas home. She's a lover of Wild Cherry Pepsi and chocolate/chocolate covered delicious-ness. Steampunk, fantasy, and paranormal to contemporary — mostly young adult — fill her growing library of books. Mother to a rambunctious darling girl aptly nicknamed Chipmunk, her life stays busy. Her favorite quote keeps her moving: “You may never know what results come of your action, but if you do nothing there will be no result.” ~ Mahatma Gandhi

She is the author of the upper young adult paranormal Neverlove and its new adult follow up They All Fall Down of the Shadow Jumpers series, Frailties of the Bond and Atone of the NEO Chronicles: Characters Revealed series, and Beacon, the first action-packed title in the young adult urban fantasy series, Ripped Ties. Her debut MG (middle grade) title is available now from Dingbat Publishing: FABLE RANGER: SUMMONS.

Summons is the first book in the Fable Ranger series written by A.L. Brown. Twelve-year-old Casey is mortified to find that she has been nominated as a fill-in bridesmaid on the same day as her basketball tournament. After storming off to her bedroom, Casey pulls out her father’s hidden book of fairy tales and hears a plea for help before she is yanked into the book. Casey finds herself in the land of Lorealia, where all fairy tale characters live, and is befriended by Robin Hood and his friend Charlie-boy. They board the flying ship, Winged Angel, and make their way to the last remaining Fairy-GIT (fairy godmother-in-training), Delilah, hoping to find a way to rescue all of the others who had been kidnapped. After disembarking from the Winged Angel, Casey is taken into Delilah’s care, where Charlie-boy teaches Casey some fighting skills, and she discovers that the Fable Ranger preceding her had been her own father. While sparring, Casey figures out what has gone wrong and takes the book of Lorealia to Delilah, Charlie-boy and Robin in the hopes of reversing the evil which has cursed their land. Before their very eyes, they see the fairy tales being erased and are in a race against the clock to return the land of Lorealia to its former glory.

I have never before read a children’s tale that kept me on the edge of my seat from start to finish. Casey thought her life was falling apart by missing the basketball tournament, and had wished herself into an alternate dimension by mistake. Summons utilizes all of the fairy tales which we have grown up with, but with subtle changes which bring horrific consequences for the land of Lorealia. The story shows a girl who believes she is good at just one thing, who hates wearing dresses and being thought of as too girly, and who wrongly believes that girls don’t cut it quite like boys do. As the story unfolds, it shows Casey coming into her own, embracing the fact that she can be female and also be strong in facing unforeseen battles and helping others to survive. A.L. Brown has delivered a story which brings out the inner child in all of us. Summons is filled with adventure, mystery, humor, surprise, and encouragement, and I recommend it to all tweens and adults who are young at heart.