When the Devil Smiles the Angels Frown 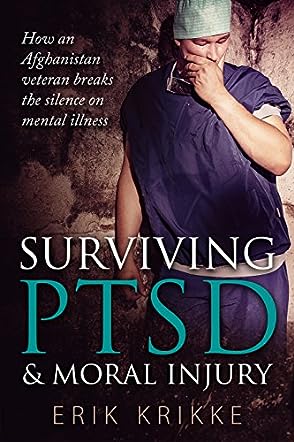 Surviving PTSD & Moral Injury is a nonfiction memoir written by Erik Krikke. Krikke had reluctantly come to terms with the likelihood that he would be deployed as part of NATO’s Multinational Medical Unit, Role 3. Those at the hospital where he was currently assigned, who would have been called up before him, had either retired or been transferred. He was an operating room nurse who had been a member of the Netherlands Army for almost fourteen years when the call from the head of the surgery department reached him. Some colleagues congratulated him on what some said would be an adventure and a professionally rewarding experience, but Krikke would far rather have stayed home with his wife and two small sons.

His three months in Kandahar were everything he feared and much more. Krikke soon realized that his group would not be given the same amount of support with acclimation and adaptation as the regular troops received. The adaptation program had for some reason been dispensed with for their team, leaving them to experience their frightening new world feeling more isolated than ever. The plywood hovel they called a hospital leaked in streams when it rained, and desert dust was an inevitable part of the very air they breathed. Worse yet was the steady inrush of horribly injured combatants, soldiers, and children. Krikke soon learned to both expect and to dread the victims’ urgent entreaties to let them die rather than remove a leg. While his deployment was limited to a three-month stretch, the ramifications of that time in Kandahar and the resulting PTSD would affect him for many years to come. Krikke had grown up valuing his strength and self-sufficiency, but he nearly lost his life to PTSD, only finding it again through the help of the Veteran’s Institute and the friends, family and therapists who worked so closely with him.

Erik Krikke’s nonfiction health memoir is an intensely powerful and honest account of one medic’s struggles with a disease that still remains closeted and denied by many. As I read this book, I would occasionally remember watching the television series, MASH, which was about a medical unit during the Korean War. While the show was big on comedic touches and the antics of off-duty medics, it also showed them constantly listening for, and instantly springing up, whenever the distant noise of choppers began to filter in, and the theme song, Suicide is Painless, struck a discordant and prophetic tone. Krikke’s story is harsh, gritty and real; he pulls no punches in describing the awful insanity of trying to fit oddly heavy limbs into plastic bags, and his growing discomfort at finding he cared more about saving some patients’ lives and limbs than others. He’s also infinitely generous in sharing the aftermath of that deployment, and the steps he’s been taking to survive his PTSD and understand the moral injury which compounded it. This intense and gripping memoir focuses well-deserved and overdue attention on the medical personnel, whose own mental health issues as a result of their service, are often overlooked. Surviving PTSD & Moral Injury is most highly recommended.