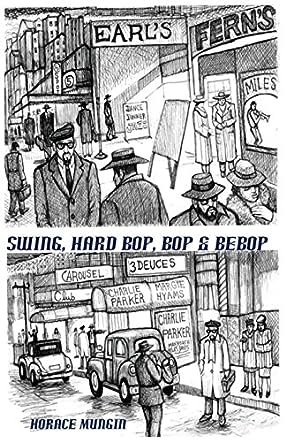 Swing, Hard Bop, Bop & Bebop: Biographical Jazz Prose Poems is a nonfiction music/entertainment book written by Horace Mungin. Mungin is a poet and author, who has written a number of biographical works on jazz artists. As his About the Author page indicates, he grew up in San Juan Hill, an area in New York City, which could be considered the birthplace of jazz in all its incarnations and subtleties. It was not uncommon for children growing up in his neighborhood to hear the sounds of Thelonious Monk and other jazz musicians wafting from overhead as they played in school yards. He and his peers knew intimately and first-hand which musicians were in town, and who would be playing in Birdland. Mungin’s introduction sets the stage for the biographical poems that follow. He discusses the beginnings of African-American music in those early work songs of the slave laborers, which evolved into spirituals and often included coded messages about escape routes. As a child, Mungin also wanted to be a musician, and like his peers, chose his own instrument, a flute which he mainly learned by practicing along with recordings. He was not, by any means, alone in being predominantly self-taught. Many of the musicians he highlights in this work learned from what they heard and then used their own creative flair to build on what became a rich and vibrant tapestry.

I will admit to having familiarity with far too few of the musicians showcased in Horace Mungin’s collection of biographical poetry, which made reading his book all the more intriguing and illuminating. There’s the saying that a little knowledge can be more dangerous than ignorance, but my scant acquaintance with Coltrane, Rollins and other jazz greats made me even more curious about who they were and how jazz, as I was familiar with it, came to be, how “New Music in America” got its start and what its history was. Mungin’s poems are brilliant, insightful and eloquent. They’re also highly accessible and very easy to read. Anyone who hesitates in reading this book because of the dreaded word “poems”, should sit down and experience what a poet of Mungin’s caliber can actually do. His prose poems flow beautifully, and under his deft touch each of the jazz musicians highlighted comes to life, shares their story and passes the torch on to the next artist. I learned so much reading this book, and I found it was impossible to put down. Swing, Hard Bop, Bop & Bebop: Biographical Jazz Prose Poems is an educational experience that would be a grand basis for a series of academic courses on the subject. This illuminating and enlightening work is most highly recommended.

This is a perfect little book. Such a big statement for so few words. Any attempt to explain why Swing, Hard Bop, Bop & Bebop by Horace Mungin is perfect is like any other attempt to explain the ineffable. One must experience it to know it. To conceptualize it, to verbalize it, to critique it is to immediately do it a great injustice. Therefore, to review it is to mostly talk around it. With that now understood, here we go. This perfect little book is about jazz. The origins, the history, the players and their times. All the great names make their appearance here. As if the book were some little club on 52nd Street. Told by the same kind of disembodied witness who narrates perfect little films about the past. Like Morgan Freeman, maybe.

This perfect little book is jazz. That must be understood, too. Not some academic treatise, dry and categorical, Swing, Hard Bop, Bop & Bebop is Horace Mungin’s poetic prose paean to a music, to an era, to an irretrievable memory of past time. Except that Mr. Mungin does retrieve a piece of time. He does it with the perfect rhythm of his words. He does it with the incredible trove of information on which he draws. Mostly, though, he does it by infusing his work with the mystery of the ineffable. And in the presence of such mystery, one must remain silently appreciative and receptive. When he does, the music of his words gets infused into the blood. No, this perfect little book does not lend itself to critical review. It must instead be read.