The One We Forgot to Love Settled on a Mountain 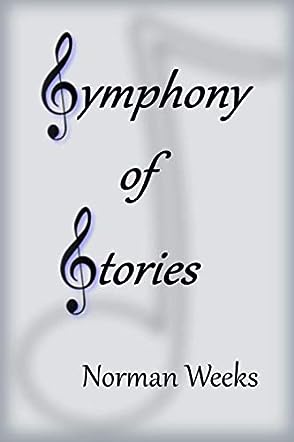 Most books of short stories are a collection of pieces the author has written for other placements, sometimes over a long period of time. Put together in a random assemblage, the stories do not add up to a whole work.

Norman Weeks had a different plan. He admired the classical symphony as an art form. So he would write stories especially for that form.

A classical symphony consists of four major movements, each with a different tone: First may be an Andante, an Italian word meaning a going-along, which is what a story too does. Next comes an Adagio, the slow movement. Contrasting with that is a Scherzo, fast and cheerful. The grand finale is the Allegro, joyous and happy.

Within the framwork of the classical symphony, Norman composed stories to fit the tone and mood of each movement:— The subject matter of each story would accord with the symphonic movement, as: the Andante, the narrative going-along in a sequence of events. Then, the Adagio, tragic stories. Next, a contrast, the Scherzo (“joke”), some comic pranks. Finally, the Allegro, the triumphant. In all, a true literary symphony, a Symphony of Stories.

The twenty stories in the Symphony of Stories, then, are not a random collection but a true composition, each story suited to its position, all in a developing progression like that of a musical symphony.

Symphony of Stories has earned a 5-star review by Readers’ Favorite.

Life is complex. Artists have attempted to unveil the meaning of life via different avenues of expression: music, art, literature, theater, dance. To some people, music is the ultimate medium of expression, a language all its own, a symphony of ideas, emotions, time and space eloquently well spent. While literature can flatly describe life, music can transcend it. Norman Weeks' collection of short stories, Symphony of Stories, brings music and literature into a comparative perspective. He explains in his introduction: “This comparison of music to literature is an invidious one. Music liberates the emotions, literature suppresses them. The former delights the senses, the latter estranges them. Music cheers solitude, literature turns solitude into a vice. Music is communal, literature anti-social.”

While, as a musician, composer, and author (not necessarily in that order), I can value his perspective and comparison, I’m not sure I totally agree with him. However, Norman’s collection of short stories creates a fascinating musical nuance in words, a symphony of literary proportions. Now, even his symphony defies the natural order of composition, as his four movements, Andante, Adagio, Scherzo, and Allegro, are not the standard order of the movements within a symphony; the fast, slow, fast, very fast order one expects. However, within each ‘movement’, each of his stories unravels the human condition in a way that parallels a musical composition. Like the first story, “Reflection”, a slow walk through one boy/man’s life that follows a very musical ternary (ABA) form. The boy learned what not to do, became a man and returned to his roots only to find that those who had taught him what not to do, the priest, the teacher, the father, all did what they told him not to do. And the boy, now a man, returns to his family and sees himself in the mirror. What does he see? A very deep, introspective story.

However, as the author compares literature to music, the story has no sound. There is emotion but in a planar, non-sensical form. The collection of stories is very thought-provoking on many levels and I, for one, appreciate thoroughly the allusion of this collection as a symphonic masterpiece.