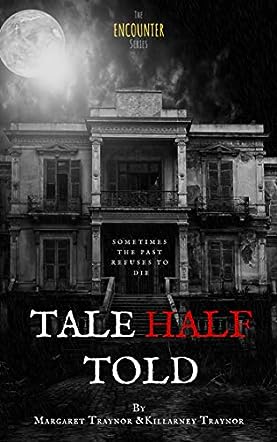 Margaret Traynor and Killarney Traynor are sisters who live in New Hampshire and have way too much time on their hands. Margaret is an EA, travel enthusiast,and coffee fanatic who works in an accounting office during the day and hikesthe White Mountains on the weekends. Killarney is an author, actress, and bookworm and generally too busy watching black and white movies to hike. Tale Half Told is the first in The Encounter Series. For more information or to contact the Traynor sisters, please visit killarneytraynor.com.

Tale Half Told: A Christmas Ghost Story is a paranormal thriller novel written by Killarney Traynor and Margaret Traynor. His wife, Susan, and their friends, Linda and Johnny, were not all that thrilled with Michael’s plan to take a detour on their way up to Susan’s parents’ home in Winnipesauke. It was December 23, and the four friends were nearly there when he suggested the side trip. As there was a nor’easter brewing, Susan had tried to get Michael to put off the visit to the tragic and reputedly haunted River House until after the holidays, but they’d be following a different route on the way back. Michael had, admittedly, a far greater interest in the spooky old house than anyone else. He worked for Reynolds Development Company and was actually a distant relation of Charles Reynolds, the veteran who had killed his wife during the Reynolds’ annual Christmas party and then committed suicide. Susan and their friends did give in to his prompting, and they soon found themselves navigating the drift-strewn and steep driveway leading to the old, somber-looking Victorian residence. They would only be a few minutes, he told them, and the four made their way into the dark and chilly old house.

Killarney Traynor and Margaret Traynor’s paranormal thriller, Tale Half Told: A Christmas Ghost Story, is a grand and glorious romp for anyone who’s ever loved the chills and thrills of Alfred Hitchcock Presents, Hammer’s House of Horrors or any of the great horror classics featuring Vincent Price, Boris Karloff or Bela Lugosi. But it’s more than just a riveting, old-fashioned ghost story. Tale Half Told also works as a compelling mystery, an insightful psychological thriller and heart-pounding journey into the supernatural. The characters are superbly crafted, and the plot has enough twists and surprises to delight sleuths and horror fans alike. Every so often, as I finish the last page of a book, I find myself remarking: Wow! What a great read! And yes, this book fits the bill. This debut collaboration is, I hope, the first of many, and I’m very much looking forward to their next book. Tale Half Told: A Christmas Ghost Story is most highly recommended.

It is almost Christmas Eve and Michael, his wife, Susan, a friend, Linda, and her brother, Johnny, are going to visit Susan’s family for Christmas, but they take a detour to just take a peek at the old Reynolds Mansion. Their plans change quickly when a car accident forces them to break in and spend the night there because of a horrendous snowstorm taking place. The company Michael works for is owned by the Reynolds family and he is also a distant cousin and therefore has knowledge of what happened there on December 23, 1946, twenty-five years ago to the day.

As the four wander about the house, each one begins to feel the horror and the haunting elements of supernatural ghosts. As the night continues they are very cold, with little food and no electricity, and they are each drawn into the mystery of what happened that night so many years ago. The ghosts of the Reynolds family are trying to reveal clues as to a murder that took place that night and to point fingers at the true guilty people. Michael, Susan, Linda and Johnny are each faced with their own demons and must fight both the real and the unreal to survive the night.

Tale Half Told by Killarney Traynor and Margaret Traynor is most positively a horror story with scary happenings at every twist and turn. I felt as though I had gone back in time and was reading a book that Alfred Hitchcock and Agatha Christie may have written together. Tale Half Told has an old fashioned eerie ambiance that kept me turning the pages with both fear and excitement to find out all of the answers that the ghosts were trying to tell. If you enjoy horror, the supernatural, and haunted house stories, then you must read Tale Half Told!

Christmas week 1971, couple Michael and Susan along with Susan's friend, Linda, and her brother, Johnny, head out to satisfy their curiosity at the notorious River House. Their plan was to only take a quick look over the property; however, when their car crashes the four main characters are forced to stay. Tale Half Told: A Christmas Ghost Story by Margaret and Killarney Traynor follows two stories: the first being that of Michael and his party and the second being the event that transformed the grand River House into the infamous murder-suicide spot where, twenty-five years ago, Charles Reynolds supposedly murdered his wife, Helene, and threw himself into the river nearby.

Tale Half Told's prologue opens with a news article that could have been narrated by Robert Stack. It drew me in with ease. As I continued to read, I couldn't help but feel as though I had entered a Lovecraftian chamber where I was made to watch the four protagonists fight against madness and fight for their lives. It is a nostalgic read but is a completely new story that any fan of horror will enjoy. Each character has an integral role to play; they may draw from classic tropes, but they are likable and memorable in their own ways. I love the time period in which the story takes place; it eliminates modern technology and creates a more distressing and tense atmosphere. Tale Half Told, from the perspective of a horror fan, is an outstanding combination of paranormal horror and mystery. It is a perfect gateway horror novel and will leave readers satisfied.