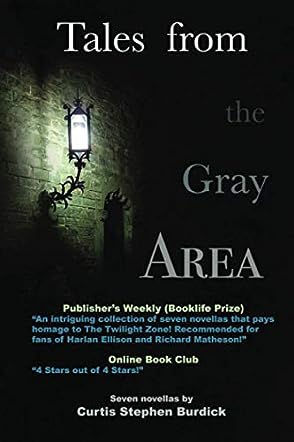 A Shadowy Realm of the Imagination that Defies Reality, the subtitle of the book, aptly describes the theme of Tales From the Gray Area by Curtis Stephen Burdick. The seven novellas stimulate readers with extraordinary tales of aliens, reincarnation, new species, hell, and whatnot! These stories are so diverse in nature that it is hard to pick one as a favorite. If I had to, then Sorceress is one of my most preferred tales. Betina Putzina's struggle to help her daughter, Marika, escape the same fate as hers was palpable. Although by using her intelligence she managed to achieve the mission, she could not give absolute freedom to her daughter. Marika had to forge the documents to fool the people who would do anything to punish her. She changed her name and residence frequently. The only constant in her life was the fear of getting caught until her path crossed with a twenty-two-year-old journalist, Beth Collins. After a long time, Marika found herself trusting somebody; however, could the skeptic in Beth believe Marika's bizarre story and answer her plea for help?

Curtis Stephen Burdick has done a fabulous job of selecting the stories for this anthology. The authentic characters of each story ensure that building a connection with them is easy; and easy, it was. Whether it was Beth's desire to be known for her work and not looks or eighty-year-old Ernie's attachment to his town/village, every character has a motive and a fire to keep moving. The reader meets these characters only for a few pages but creates a bond with them. Regardless of the novella the reader picks, it begins with a strong, mystifying hook, proceeds to a gripping narration, and ends with a cliffhanger. Tales From the Gray Area by Curtis Stephen Burdick is a perfect book for readers who enjoy short stories that explore the unimaginable and leave them gasping for air.

Tales from the Gray Area, a collection of seven novellas by Curtis Stephen Burdick, stems from the author’s fascination with The Twilight Zone. The novellas encompass a variety of themes and characters, including supernatural and extra-terrestrial. In one story, many children are born worldwide with a curious birthmark, which resembles a symbol from a hitherto undeciphered ancient language. Somewhere, monstrous creatures arriving from the depths of the ocean attack humankind. In another novella, an unlikely friendship forms between an alien and a movie star. A Romani woman flees her pursuers to save her children from a terrible fate. Fallen archangels take a break from hell and roam the earth disguised as human beings.

Curtis Stephen Burdick set his novellas in vastly different backgrounds, from a seemingly endless sea to an arid desert, from a busy and wide-awake city to a remote, snow-covered valley. Although the predominant theme was supernatural occurrences, I loved how he provided each character with a thorough background. Incredibly enough, I ended up rooting for a demon from hell and empathized with an alien emperor living lightyears away from his home planet. The novella “Sorceress” maintained a sense of mysticism throughout, while the unexpected ending of “Reincarnated” left much for the reader’s imagination. My favorite was “Vacation from Hell,” which revealed redeeming attributes even in a soulless person. The humorous conversations between aliens and humans in “Alien Addiction” added a unique flavor to the story. I would recommend Tales from the Gray Area to any reader who appreciates illusory stories with unpredictable endings.

Tales from the Gray Area is a collection of seven short stories written by Curtis Stephen Burdick. Set in different periods and varying in genres, all the stories share a common thread in the mystery of the unknown and mystical. Bottom Dwellers is about a deep-sea exploration vessel's crew who unwittingly releases monstrous tentacled creatures from the dark depths of the ocean's floor that brings down the apocalypse. On Vacation from Hell, a Fallen Angel visits Earth and possesses the body of a corrupt politician, only to fall in love with his wife and family. Discoveries at River View sees a man's attempts to stop construction in his valley turned upside down when prehistoric remains are found at the site. In Alien Addiction, a drug-addled emperor of an alien civilization seeks recovery at a rehab clinic on Earth.

Fans of TV shows such as The Twilight Zone or The X-Files are in for a treat as Tales from the Gray Area hits every spot that made those shows popular in the first place. Author Curtis Stephen Burdick's stories range from the surreal and hypnotic to humorous and tragic, quite often being all of these at once. Every single story has something different to offer, yet the tone remains the same. The narrative is well-paced and breezes by quickly. Almost all the climaxes felt ambiguous. Curtis Stephen Burdick switches genres between sci-fi, fantasy, supernatural, and even horror in a seamless fashion. I found Vacation from Hell, Sanctuary, and Alien Addiction to be my top three favorites, although I enjoyed them all. I highly recommend Tales from the Gray Area.