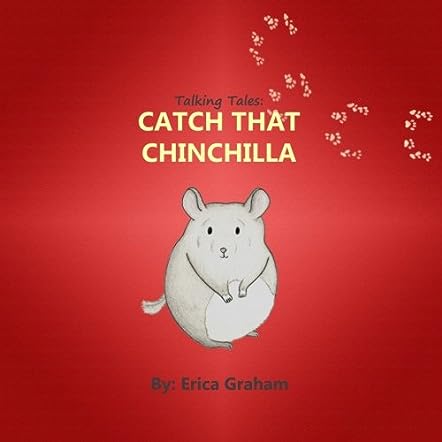 Erica Graham is an award winning children's author. Graham graduated from Southern Illinois University Edwardsville with her Master of Science Degree in Speech Language Pathology. She also holds her Certificate of Clinical Competence with the American Speech-Language Hearing Association. As a mother, Graham understands the difficulty parents have finding time to work on speech with their children. In her pursuit to create a fun easy way for therapists, children, and their parents to enhance speech development while promoting literacy, she has written a series of exciting children’s books. Each book focuses on a core sound used in the English language. Outside of writing and working as a Speech Language Pathologist, Graham enjoys spending time outdoors with her husband and daughters, volunteering with the youth group at church, and a good cup of tea.

Catch That Chinchilla is an educational tale from the Talking Tales series for children, and is both written and illustrated by Erica Graham. Fletch and his sister, Rachael, receive a new pet chinchilla from their father, but against his wishes, they unlock the cage in order to reach in and pat him. The moment the door opens, the chinchilla scampers out, jumps out the window and runs around town, wreaking havoc everywhere he goes. Frantically, the children try to catch him and return him to his cage before their father gets home. After cleaning up the giant mess that the chinchilla has left in his wake, a deflated and defeated Fletch and Rachael are about to get a huge surprise when they arrive home.

What an absolutely delightful book to read! Erica Graham’s clever tale has been written in order to help young readers with their spelling and pronunciation, while taking youngsters on an incredible adventure at the same time. It was fun to read the story as it unfolded, with the escape from the cage and the children’s home, only to see in stages all of the mischief and mayhem that a pet could ever possibly create while on the run. The atmosphere of the story is one of fun, and I found myself quite unexpectedly smiling throughout the entire story! I definitely enjoyed the massive shock and surprise at the very end of the tale and wholeheartedly recommend Catch That Chinchilla to young readers aged 5-12, especially if they are thinking about acquiring a tiny pet for their home.