Teachings of a Shaman 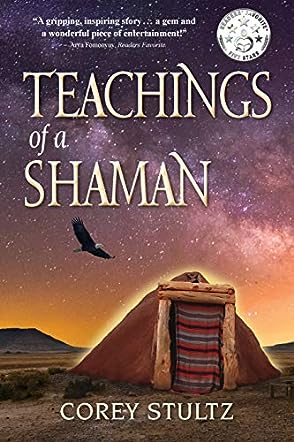 I was a high-functioning alcoholic for twenty-five years. Teachings of a Shaman draws on my personal experiences of gutter-fed addiction, rock-bottom revelations, and ultimate recovery. The profound spiritual growth I experienced after overcoming my addiction manifests in Dwayne’s journey from drug addict to respected shaman. Today, I am not only sober, I am a Sunday school teacher.

Teachings of a Shaman: A Story of Deliverance & Redemption by Corey Stultz is a gripping, inspiring story that explores the themes of family, healing, and a man’s desperate quest to save the life of his offspring. A patient suffering from amphetamine psychosis attacks Dwayne a couple of days after his admission into a drug rehabilitation center. He falls unconscious because of the attack and, when he regains consciousness, he finds himself in the middle of nowhere, in a desert, without memory.

It is here that a Navajo shaman named Rising Water rescues him from hunger and thirst. Hence begins a new journey for Dwayne, a spiritual odyssey that unveils the secrets of the shaman and a new way of life. He quickly learns from the wisdom of the man, over a period of four years, and becomes so skilled that Rising Water makes him a shaman. Now, when he returns home, he discovers that he has a son who is battling a terminal illness. Nothing could save his life… except he performs a ritual he learned while living with Rising Water, but does he have what it takes to make this ritual a success?

This is a beautiful story that is so beautifully told and readers will find themselves following the protagonist and caring so much about him. It’s a spiritual adventure fraught with lessons about life, inner freedom, and love. I enjoyed the great writing, the strong plot with its surprising turns, the insights and the emotional depth of the story. Corey Stultz has written a story that will bring light and love into the hearts of readers. Teachings of a Shaman: A Story of Deliverance & Redemption is a gem and a wonderful piece of entertainment for readers. It was a straight read for me.