Tell Me When I'm Dead 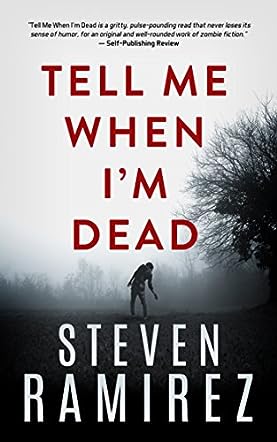 Tell Me When I’m Dead: Book One, by Steven Ramirez, is a horror thriller about a normal man who risked his life to save his loved ones, all the while learning what it means to be alive. Dave had met the woman of his dreams, and was now in the process of getting his life together. But when an old friend goes missing, Dave is plucked out of his comfortable life and must deal with the unwanted interruption. Things spiral further out of control when a woman by the name of Missy shows up, demanding that he leave his wife for her. As Dave’s life slowly starts to unravel, and the body count continues to grow higher through the help of an unknown virus, he is left with a gruesome choice; either to wallow in his sorrows, or stay alive. In this thrilling novel, Ramirez details an anti-hero’s struggles for family and love, and to find beauty in a world ruled by the dead.

Dave seemed like a weak-willed man at first. Although he attempted to turn his life around for Holly, it seemed he was only going through the motions of life. He was so desperately trying to fit into Holly’s perfect little future that he even wound up alienating Jim, a good friend for so many years. What’s more, he’d even fooled around with Missy, though he knew it was wrong. As each of the people he knew turned into the undead, I can’t help but feel that he woke up, in a sense, as he started to protect the people he cared about. It was an interesting inversion, the fact that he’d never been more alive at the end of the book, even though the rest of the nation, and presumably the world, had to die.

Ramirez’s take on the anti-hero was rather intriguing, a sort of double-edged sword that led him to a better life than the one he had now. But despite all the rules that Dave had thrown out, somehow, he managed to bring with him morals and the basic beliefs of love and family. It goes to show that these things are truly timeless, whatever horror may come. While this concept has been explored in a variety of zombie novels, it’s still a wonderful idea to investigate. The details were beautiful, and the concepts of thriving and timelessness were also wonderful. As such, I would recommend this book to those who love apocalyptic stories in general.