Three Faces in the Mirror 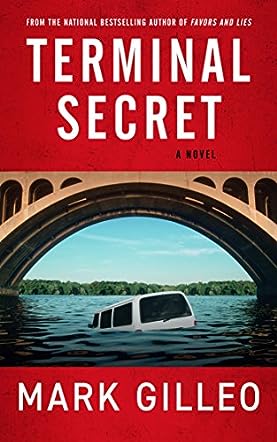 Mark Gilleo’s Terminal Secret is the second in what may well become a successful series involving the exploits of Dan Lord, a private investigator who is also an attorney. He’s based in Washington D.C. and in this story teams up with two detectives, Earl Wallace and Emily Fields of the Washington Metropolitan Police. Not far into the story, an attorney is murdered on her doorstep in a wealthy D.C. enclave. Nothing so unusual about that per se, but a visit to Dr Lewis, the Medical Examiner, changes all that. Meanwhile, Dan is hired by a congressman’s wife, Sherry Wellington, who fears for her safety. Dan’s brief is to find Sherry’s ex’s killer, but the woman is hiding something — secrets from her past — and, if Dan is going to help her, he needs to know what they are. As Dan embarks on his investigation, Wallace and Fields get on with theirs. Each step in both investigations reveals another puzzle, the intrigue deepening with each twist and turn. Even when Dan enlists the help of other police officers and an IT guru, unravelling the mystery proves challenging, even for our super sleuth. When he eventually connects the dots, he can hardly believe what he has unearthed.

I did wonder why a guy who was both a lawyer and a private investigator, neither profession particularly enamoured by cops, had no difficulty in getting information and even co-operation from so many law enforcers. But I guess there are exceptions. That aside, Terminal Secret is chock full of intrigue from beginning to end. The story is coherent, the characters captivating and engaging, the dialogue script-like and realistic. As the tale nears its denouement, each page turn causes a sharp intake of breath. Just when you think you’ve worked out what’s going on, along comes another twist. Author Mark Gilleo’s imagination and creativity shine through this riveting read. Terminal Secret is both thriller, murder mystery and suspense rolled up into one delightful package.

Terminal Secret by Mark Gilleo is a new mystery featuring DC Detective Earl Wallace and Private Investigator Dan Lord. Wallace and his new partner, Detective Emily Fields, are assigned to the case of a murdered attorney while Lord receives a new client in the form of a Congressman's wife, who requests that he investigate the murder of her ex. But keeping her secret could cost Lord his life. When Lord and Wallace's paths cross again they discover their cases are not only connected, but could solve a string of unsolved murders.

Terminal Secret is a case full of secrets, with a compelling plot that keeps you guessing as each piece of the puzzle falls into place, and characters that are well-developed with a range of complicated side characters. The case itself is layered and complex, with an emotional base dealing with suspects that are mostly facing end of life decisions. Mark Gilleo delivers a mystery of humanity and mortality, about family and loss, life and death. Gilleo creates a range of suspects that are sympathetic with understandable motives. It's hard to despise the characters, because they're very human, flawed and honest. It's case driven with the main focus on the mystery, but the emotion is sincere. Wallace and Lord are both grounded protagonists with a fun banter that shows their long time connection. It was enjoyable seeing how Wallace's partnership progresses with Fields. In the beginning, he had no interest in a partner, but as the case progresses they develop respect for one another. A must-read for crime novel lovers!