Off Center In The Attic by Holly A Sortland 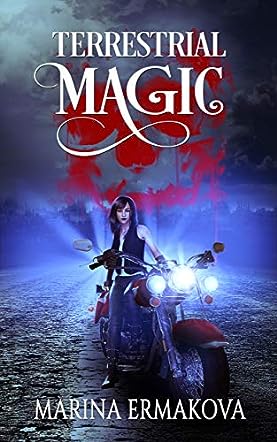 Adventure fantasy writer Marina Ermakova has degrees in genetics and history, and the heart of a lifelong geek. She loves writing about outsiders, loners, and thinkers.

Terrestrial Magic incorporates a number of her own experiences and knowledge. She's a scientist much like her protagonist, and has spent a semester abroad in Rome as an undergrad, which she specifically dedicated to studying ancient history.

She's also on the asexuality spectrum and finds herself predisposed to writing characters who share characteristics of that--though that doesn’t necessarily stop them from having romances, as Terrestrial Magic's protagonist can attest.

Terrestrial Magic by Marina Ermakova is the first book in the Jordan Sanders series. Jordan works with other researchers to study legendary creatures who made their way back into the world a few decades ago. With their arrival, life changed with safety zones set up for humans and the vacated land reclaimed by legends of long ago. These legends have power inherited from ancestors such as Hercules and show no fear of the monsters. Jordan's life is fairly routine with expeditions to study legendary monsters until someone tries to kill her. This leads Jordan and her team to the House of Hercules where she works to navigate diplomatic conflict and decide who tried to kill her and why.

The story begins in the middle of Jordan and her team going after a monster, diving straight into the action with a fight against a chimera and basilisk. A world of monsters and legends is quickly introduced while also exploring Jordan's dynamics with her team, which consists of Hayley, Tony, Luca, and Carter. These relationships are an integral part of Jordan's life as this is the team she relies on and works with every day. She has a different relationship with each of them, but each has banter and moments when she connects with them. The team dynamic is a crucial part of the story as how they work together plays into solving who wants to kill her and provides back-up when going up against the legends. An interesting aspect of Jordan's character is the thrill she gets at entering this danger. She's passionate about learning about these creatures but she also enjoys the freedom of leaving the safety zones.

Marina Ermakova weaves in quieter moments for readers to see these characters in a more vulnerable light and to see more layers to their personalities. This world is incredibly complex and dangerous. The legends further weave in mythology as they're based on famed myths such as Remus and Romulus, and the story of Hercules. Ermakova opens this world with a fresh take on mythology, weaving in a post-apocalyptic set up with the story taking place decades after the literal return of legends and myths. The mystery is at the heart of the story as Jordan investigates who would want to kill her and uncovers plenty of twists and surprises. Terrestrial Magic is a unique post-apocalyptic adventure that's a breath of fresh air and puts a new spin on mythology and legendary monsters, with mystery, danger, and instantly likable characters.