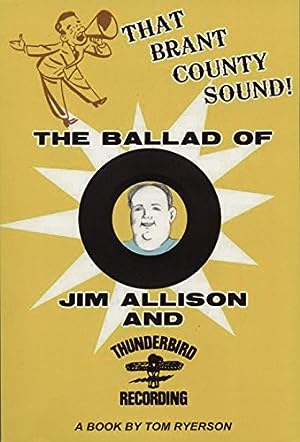 That Brant County Sound! is my 14th book overall, but is the first in this genre, the biography of a man and his record label. I'm a fan of every type of music, but have always enjoyed bluegrass and old time country. This book allowed me to really delve into both the country music culture and the mid 1970's nostalgia. I'm very proud of this book, and I hope readers everywhere enjoy it as much as I do.

I am, by no stretch of the imagination, a musician. I am a music lover, though, and I appreciate good music and the 'behind the scenes' people and forces that combine to push it into the popular consciousness. From that perspective, I could enjoy and appreciate That Brant County Sound! The Ballad of Jim Allison and Thunderbird Recording by Thomas A. “Tom” Ryerson. It is an in-depth look at the country music scene at a particular time and a particular region in Canada. I am not Canadian, but I learned a lot about how music is made and produced in Canada. I am from Alabama and though I have not researched it, I believe similar people and forces came into play in my own region to create the sub-genre of Rock and Roll called Southern Rock. It was fun to compare the growth of Southern Rock in Muscle Shoals, Alabama to what happened with country music in Brant County. Sometimes one man, in this case, Jim Allison, can make all the difference in the world.

That Brant County Sound is straightforward and relatively simple. It is the story of Jim Allison, and how for one shining moment in time he created a machine, a sound, that made a real impact on the Canadian music industry. There are a lot of biographies of the bands, families, and individuals that came together to define this sound. I learned a lot about Canadian country music, which I admit, up until I read Tom Ryerson’s book, my knowledge consisted of one Canadian country artist, Shania Twain. The characters are real and so are their struggles. The writing is good, and the book is very informative. I liked it. I enjoyed it. I think Thomas A. Ryerson has made an important contribution to history and to music. Any music fan from any country in the world can learn from and appreciate That Brant County Sound!

This book covers the efforts of Jim Allison without being too biased. Tom Ryerson very carefully and cleverly draws the reader into Jim's world where he is taking his recording studio to great heights. There is success and then there is failure, but Jim’s dedication and his desire to bring country music to everyone are undiminished. The characters felt real, their emotions were often running high, and Tom Ryerson did a great job in portraying them with all his heart. The reader can feel the hard work the author put into it and feel his own dedication. Even though I had no idea about Thunderbird Recordings, I was riveted to the story and the ups and downs of this company. The story is fast paced without being too rushed; it is given time to mature and that’s what made the story click for me. It is very well written.

That Brant County Sound! The Ballad of Jim Allison and Thunderbird Recording by Tom Ryerson is a terrific book, the true story of a small-town recording label that made it to the big time, if only for a short while. It made for interesting reading, more so because I love country music anyway and am always interested in reading the real stories behind the music. This is an incredibly well-written book, and it is clear that a great deal of research went into it. Mr. Ryerson has done a fantastic job in detailing the lives and the stories of the people that were a part of Thunderbird Recording, and of Jim Allison, the man who was Thunderbird Recording. Great story, I'm looking forward to the next installment!

That Brant County Sound! The Ballad of Jim Allison and Thunderbird Recording by Thomas A. ‘Tom’ Ryerson’ is a book that speaks about a country music label - Thunderbird Recording - that ceased operations in December 1978 after three and a half years. Jim Allison liked music and he came from a musically inclined background, especially that of his mother. This book is about Thunderbird Recording of Burford, Ontario that released around 25,000 singles between May 1975 and January 1979 and how these records did not get much farther than the borders of Brant County. Some of these copies did make it across Canada, and into the southern states of the USA, thanks to promotional mailings and sales at concert events. The author sheds light on that time in Brant County which saw the beginnings of the local country music scene at Brantford.

To be a part of Jim Allison’s musical journey is amazing and this is a book that will interest all music lovers as it takes them to a different era which is not all that familiar to many of us. The narration is detailed and vivid, and the author is very vocal about his love for music and his admiration for Jim Allison, who made country music famous through his recording label Thunderbird Recording. The book brings back memories, untold stories along with the biographies of artists and Thunderbird stories. I found the book engaging and entertaining, and everyone who is into music will enjoy this book about Jim Allison and his tryst with country music and Thunderbird Recording.

That Brant County Sound! (The Ballad of Jim Allison and Thunderbird Recording) by Tom Ryerson is a well-written book with a laid-back feel. I liked the fact that the author kept the tone of the book casual; it felt as if he was talking directly to me without any jargon. I liked how the author had the book broken down into well-organized sections that allowed me to differentiate between the different pieces of information being given and whom it was about. Part One: Background was one of the most useful and interesting sections as it focused on family history; I loved reading about the family history that led a person from childhood to adulthood to fame. Overall, I walked away from this book feeling as if I had learned a lot about Jim Allison and Thunderbird Recording, and how they achieved what they did.

We both truly enjoyed reading this book, so well written