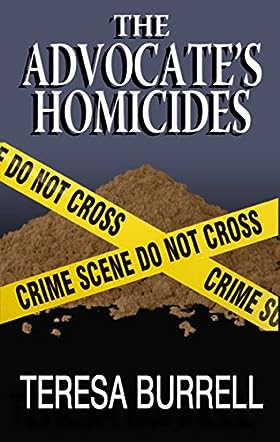 Burrell also has two children's books that are fun for the whole family--Gaspar, the Flatulating Ghost, and Gaspar Meets a Bully.

It’s a real treat to find a legal mystery fiction that you can get into quickly and enjoy the unfolding plot without getting lost in a copious amount of lawyer jargon as happens to too many legal thrillers. Teresa Burrell, author of The Advocate’s Homicide, is a lawyer, but her focus isn’t on impressing readers with her knowledge: it’s on telling an absorbing story based on a too common and very sad social issue: paedophilia. Burrell wants her readers to understand the devastating long term effects of sexual abuse, in this case on young boys. Can it lead them to abuse others? Can it even make them murder their abusers? And how does working with abused adolescents like those in The Advocate’s Homicides affect the therapists and the children’s lawyers. And could an abused child be convicted of murder even when the evidence doesn’t really add up?

Readers will get thoroughly caught up in the plight of a drug addict’s son whom lawyer Sabre O. Brown refuses to believe has murdered and partially buried his abuser. Like Sabre, we don’t believe he’s guilty. Then, when more bodies show up and their murders are similar to this one, Sabre and her associates decide there’s a lot more to these homicides than abused children taking revenge. Readers will be kept guessing who the real perp is almost to the end as the team exhausts itself investigating every possible suspect and scenario. The strength of Teresa Burrell’s writing lies in her marvellous use of dialogue to keep the story moving. When it comes to descriptions and facts, she keeps it short and on a need to know basis only. This makes reading The Advocate’s Homicide so enjoyable and so quick, but never with a lack of believable characters who chatter amicably, tease each other and joke around, like real people do. The Advocate’s Homicide is a wonderful blend of good and bad and will most likely have readers unfamiliar with Teresa Burrell looking at the other books in this series. I certainly intend to check them out.

Sabre and JP are back in another thrilling legal mystery, The Advocate's Homicides (The Advocate Series Book 8) by Teresa Burrell. The body of a pedophile is found in a shallow grave with one word marked on his forehead; Goof. The catch? Since the pedophile wasn't charged or tried for his assault, only a handful of people knew of his actions. All the evidence points to his last known victim, Trey, a young teenage boy with a questionable past. Trey insists he wasn't anywhere near his assaulter at the time of his death, but one irrefutable witness says otherwise. Attorney and child advocate Sabre O'Brien will have to pull out all the stops with this case as it snowballs into a vigilante's dream and a cop's worst nightmare. As Sabre fights to keep more innocent boys from going to prison, she collaborates with as many people as she can. Only, as the evidence piles up, she can't help but wonder, are they really innocent? Or have they served up their own brand of justice?

The Advocate's Homicides by Teresa Burrell is another fantastic mystery, featuring our favorite legal team, Sabre, Bob, and JP. The stakes are raised, and it looks like Sabre and her justice team are in over their heads. As the eighth book in the series, it did not disappoint. I appreciate how the author spins current laws and statutes within her story and somehow explains everything in a way that makes it understandable for anyone, all while remaining in her story world. Her compassion for children and the carrying out of their rights ripples through her stories, infecting the reader. I loved this book; actually, I love the whole series! I would recommend this book to adults that enjoy legal thrillers and mysteries, as it includes content unsuitable for children under sixteen.

The Advocate's Homicides by Teresa Burrell is the eighth book in The Advocate Series, but the first one I have read. This story is about Sabre Brown, an attorney who tries to help a teenage boy accused of murdering the guy who molested him. Sabre believes he is innocent and sets out to solve the case. It is not until years later that more bodies are discovered, and Sabre starts getting some answers.

I enjoyed reading The Advocate's Homicides because, although I figured out who the murderer was early on, Burrell kept me second guessing myself till the end. I also learned what a “goof” is and will no longer be using that word. The story reminded me a little bit of the television series Law and Order: SVU. In The Advocate's Homicides, there are victims of sexual abuse, attorneys and courtroom scenes. The only thing missing was a strong police presence. However, I preferred it that way. I liked that Burrell focused on the seriousness of the case and did not add too much of the background drama that usually ends up taking away from the story.

In this story, Burrell shines a light on sexual abuse victims and brings to attention that they are not always female. She also touches on how the courts sometimes fail the victims of sexual abuse. Overall, I liked this book and would like to read the other books in this series. Sabre and JP are likable characters and I am curious about the other cases they have worked on together. If you like serious murder mysteries, then this is the book for you! I loved the story.