by John A. Daly An Apple for an Eye, a Seed for a Tooth 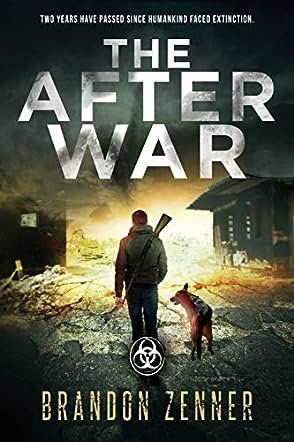 Brandon Zenner is an American fiction writer and an Amazon best selling author. His short fiction has been published in both print and online publications, the first being submitted when he was 19 years old. THE EXPERIMENT OF DREAMS, his debut thriller, has reached Amazon's best seller list many times. His second novel, WHISKEY DEVILS, was a winner in the 2016 Global Ebook Awards. THE AFTER WAR, a post-apocalyptic thriller, was a semi finalist in the 2016 BookLife Prize in Fiction, a contest run by Publishers Weekly, and a finalist in the 2017 Eric Hoffer Book Award. His genres of choice are thrillers, crime, dystopian, and science fiction.

The After War - Part I To Alice by Brandon Zenner is a dystopian fiction novel that is the first book in The After War Series. This is a book that would appeal most to a mixed audience of young adults and adults who enjoy stories that take place in worlds after an apocalyptic event, and who do not mind violence, disturbing situations, and explicit language. This book begins two years after humankind faced extinction, and people are just beginning to come out of their bunkers and secluded cabins. Brian and Steven are cousins who have decided to venture out of their underground bunker for the first time since war and disease withered the planet. Will the cousins be able to not only survive, but also live in this new post-war torn world?

The After War - Part I To Alice by Brandon Zenner is a well-written book that would fit in perfectly with a high school literature reading list. When I was in high school, I had to read The Road for a book project; this book reminded me a lot of the overall feeling of The Road. However, I personally felt that Brandon Zenner did a much better job at character development, especially in relation to the cousins. The way the author created his own world environment made the book unique as the effects of the war and disease on the world were not predictable. Overall, I found the book to be a good read, despite its melancholy atmosphere, and I would be interested in reading any future follow ups.

Brandon Zenner’s The After War is a dystopian novel about Americans who survive a cataclysmic world war and subsequent species-exterminating illness. Brian Rhodes and his cousin, Steve Driscoll, survive the ravages of the disease by hiding in a well-provisioned underground bunker. Far to the north, survivalist and adventurer Simon Kalispell takes refuge in an isolated family cabin on the Canadian frontier. After being on their own for two years, these men venture into the war and disease-ravaged world and begin their journeys in search of family and home. The men discover disturbing remnants of civilization in a shattered landscape, but eventually reconnect with a measure of civilization. But all is not as it seems and because of the depravity and insatiable power-hungriness of men, there remains one great battle to be waged.

I am a huge fan of the dystopian genre. Zenner’s description of the post-disease world captivated me. I appreciated how the author described the modest, believable ways that ordinary people prepared and managed to survive their world’s apocalypse. Many other books in the genre become so engrossed in military jargon and acronyms that they become too frustrating and troublesome to read. Such was not the case in this novel. It was very conversational and readable. The author delivered on his unique view of the post-calamity world that he constructed in his imagination. His creativity and attention to detail were excellent. All in all, Brandon Zenner's The After War is a solid effort. It kept my interest. And the ending definitely left the door open for future installments in the story.