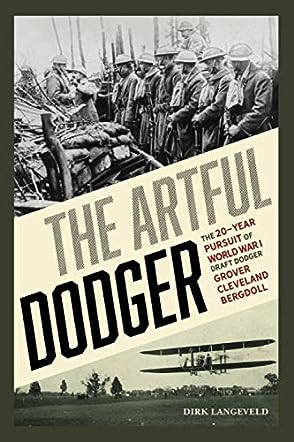 In 1917 the United States was gearing up for war against Germany and the rest of the Central Powers. Wilson had had enough and asked Congress to declare war, which they did. From this declaration the draft was initiated and many young men were required to sign up for selective service. Soon men were called to their local draft boards and evaluated as to whether they could serve in the army or not. One of those men was Grover Cleveland Bergdoll. In The Artful Dodger, Dirk Langeveld shows us the complex and often strange circumstances of how Bergdoll failed to show up for his induction into the army, was labeled a deserter in time of war, arrested and court-martialed, and then subsequently made a dramatic escape, evading the police and the army until he showed up in Germany. The story of Bergdoll’s arrest and escape captured the attention of the press, and the enmity of veterans’ organizations, the army, and the government, who were determined to make sure that Grover Cleveland Bergdoll served his time for desertion.

I found The Artful Dodger to be an entertaining story of how one man managed to elude authorities for 20 years. Bergdoll is an interesting and extreme character, a man born into wealth in Philadelphia (his father, a German immigrant, was a wealthy brewer), who drove cars in auto races and learned to fly from Orville Wright at the Wright Brothers' school in Ohio. Bergdoll was a spoiled child who felt that the rules didn’t apply to him because of his wealth and status. It was unsurprising that such a man would try to avoid service to his country (many men have done the same thing over the years), but the circumstances around Bergdoll’s desertion, capture, and escape make for a highly entertaining tale. Bergdoll and his family engaged in wild antics such as taunting the head of the Congressional committee with newspaper clippings from the German town where he had escaped to, and sending letters to newspapers alluding to greed and conspiracy within the army itself to help him escape. I found the government’s dogged pursuit and insistence on making an example of Bergdoll, even after he returned to the US and turned himself in to authorities, an interesting part of the tale. Why the government spent so much time, effort, and money in the pursuit of one man is still hard to fathom.

I recommend The Artful Dodger for readers interested in history and historical figures. Grover Cleveland Bergdoll may be unknown today, but in his day his exploits – and the anger they inspired – were front page news. Readers will not only learn a lot about a single man who was a deserter, but the government that felt it had to make Bergdoll an example, even well after the specifics of his crime had been forgotten.