Apophis - Into the Folds of Darkness The Battle for the Alamo Taqueria 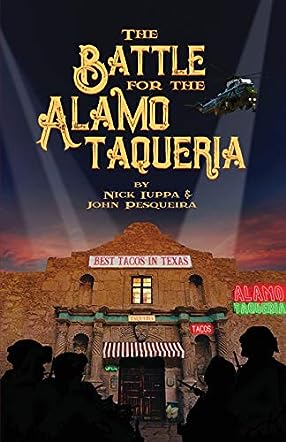 Nick Iuppa is the former Creative Director of Paramount Pictures’ Digital Entertainment, Head of Apple Computer’s Learning Technologies Group, and Writer for the Wonderful World of Disney. He’s the author of 8 novels, 4 technical books on new media, and a humorous compendium of management tactics called MANAGEMENT BY GUILT. Nick’s an avid international traveler, hiker and adventurer. He and his wife, Ginny, live in the San Francisco Bay Area.

Reviewed by Neil A White for Readers' Favorite

The writing team of Nick Iuppa and John Pesqueira is back with The Battle for the Alamo Taqueria, a laugh-out-loud farce exploring the complex – and timely – issues of illegal immigration, border protection, and should enchiladas be made with flour or corn tortillas. Okay, I made that last one up, but when your story’s focus revolves around the Rio Grande and Texas in general, all three subjects must be carefully considered. The Battle for the Alamo Taqueria takes on an issue that is not a laughing matter, but, in their inimitable way, the authors help us to see the pure folly in dividing a people from lands that held a significant cultural meaning for them for centuries before the arrival of the first Europeans.

Amongst as colorful a range of characters as we’re ever likely to see, meet Claudia, our main protagonist. A latter-day Joan of Arc, Claudia is first rebuffed in her attempt to slip into El Norte – the north. But with the help of a fire-brand priest, a helpful business mogul, and assorted other characters both north and south of the border, they forge a plan to strike a blow against those that would keep her from the flower shop in Florida she dreams of owning. Yeah, it’s complicated. While a million-man peasant army masses on the border, Claudia and her compatriots slip into Texas to retake the Alamo. Unfortunately for Claudia and her team, their plans go slightly awry as they do. Rather than the actual Alamo, our story comes to a head at the Alamo Taqueria not too far away in Mole, Texas. I’ll not give away the comical conclusion other than to say, there will be Tex-Mex! Messrs. Iuppa and Pesqueira have delivered a novel that has tongue firmly planted in cheek, yet is still able to portray some of the personal tragedies that the current political situation has created. And if you can still find humor amongst today’s political headlines, you’ll thoroughly enjoy The Battle for the Alamo Taqueria, too. Now would someone please get me a cerveza!