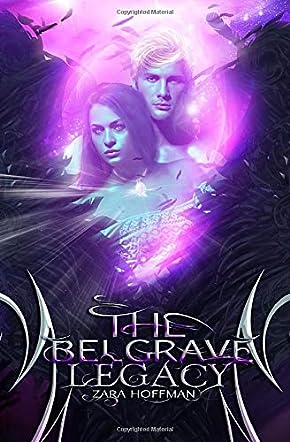 Zara Hoffman is a college student and self-published author who is always dreaming of her next book.

The Belgrave Legacy by Zara Hoffman is an upper young adult paranormal novel about the ancient fight between Heaven and Hell. Upon her 16th birthday, Fawn Belgrave receives her inherited magical powers. After nearly setting her mom and twin brother on fire, she decides to never use her magic. Three years later, Fawn is away at college when she meets the handsome and alluring Caleb who harbors a secret of his own: two hundred years ago, Caleb made a deal with the Devil, trading himself to save his mother. A chance at freedom leads him to Fawn with the intent to corrupt her. Little do they know, they're both part of a prophecy that foretells the end of the world, and the possible saving of it. Together they have to find their own paths in the feud between good and evil, but Fawn will have to learn to trust her heart, while Caleb gets the chance he's been working for. But a betrayal threatens to destroy both their plans. Can Fawn heal her heart in order to save the world?

The novel starts with a summary of the deal between God and Lucifer for Fawn's life, bargaining her actions for the salvation or destruction of the world. Zara Hoffman does an excellent job of showcasing that people aren't fully good or bad through the alternating perspectives of Fawn and Caleb. Fawn has the potential to be both the savior and destroyer of the world, but she has the free will to decide what to choose. Hoffman's writing is strong, creating a distinct voice for Caleb and Fawn, while finding a balance to the magical elements. Fawn is the standard savior of the story, but the other heroes of the story are the ones that are unsuspecting or the most flawed: the Siren, her underrepresented twin, and the dark angel. The Belgrave Legacy is a story of forgiveness, love, mistakes, and redemption.