The Sex The Lies The Soul Ties 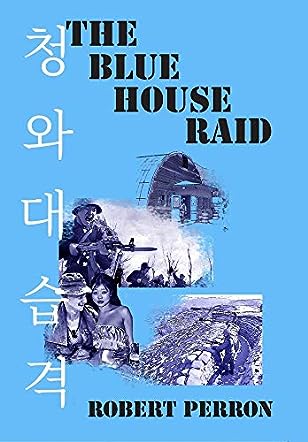 Robert Perron lives in New York City with his girlfriend Irene and maintains a residence in New Hampshire with his daughter. Robert and Irene are ardent mountain trekkers in the US and around the world. Robert’s past life includes a high-tech career in the Greater Boston area preceded by military service with thirteen months on the Korean DMZ. His current life includes short stories, a second novel in the works, editing, and a rich association with fellow writers in the New York City area.

Robert’s novel, The Blue House Raid, published in 2020 by The Ardent Writer Press, is the story he always wanted to tell since his involvement with the depicted events many years ago. While fictional, the story has strong roots in the actual times and events.

Robert’s numerous short stories have appeared in journals in the US and UK.

Visit his website at https://robertperron.com. The website incorporates the author’s short stories, readings from talented colleagues, and a perspective on his novel.

The Blue House Raid: American Infantry and the Korean DMZ Conflict by Robert Perron takes us back to 1968 at the height of the Vietnam War when elsewhere in Asia the American military was also pulling duty as assistants to the South Korean Army, patrolling and keeping intact the Demilitarized Zone between North and South Korea. When Private Lorne Boyle arrived in Korea on the end of a three-year enlistment in the US Army, he found himself posted to the pointy end of DMZ deployment as part of the Second Infantry Division. Arriving in the depths of winter, Boyle was soon to discover Korea was a very different and much colder place than his home back on the chicken farm in Alabama. Identified early on as a leader, Boyle quickly becomes appointed acting Sergeant of his own infantry team that would patrol the Demarcation line of the ceasefire with the North, as well as the frozen fields and hills of the no-man’s land that was the DMZ. Three days on, one day off soon became a regular routine, with the one day off being spent by Boyle and most of his comrades at the nearby village and with the willing young Korean prostitutes, who worked to survive but also in the faint hope of capturing a GI’s heart and returning to the States as a soldier’s wife. Meanwhile, just across the DMZ, a crack team of North Korean soldiers is training for an audacious raid, one that will go down in history – attack the Blue House (The South Korean President’s residence) and cut off the head of President Park Chung-hee. Inevitably, American GIs, North Korean Chosŏn soldiers, and the South Korean civilians of the nearby villages to the DMZ are heading for conflict.

The Blue House Raid is a very readable military conflict book, with a strong plot, believable characters, and a backstory based on actual events. There was indeed an attempted attack by the North Koreans on the Blue House and author Robert Perron skilfully weaves his fictional account around the recorded events that occurred. What I particularly liked about this story was the general lack of gore and blood in the narrative. Instead, the focus was on the individuals involved in all three areas of the story; the Chosŏn soldiers, the American GIs, and the “comfort girls” or prostitutes. Giving the perspective of the North Koreans, their planning, motivations and giving a human face to the people that are so often only seen through the lens of their fanatical leaders was an inspired touch and it was even possible to feel sorrow and empathy for these young men indoctrinated with both fear and reward. I also particularly enjoyed getting to understand the girls that serviced the GIs and trying to understand what had driven these young women to do this job and to do it willingly. This is a character-driven story and the author does an excellent job in drawing these characters out. His knowledge and understanding of the conditions on the ground were doubtless underpinned by the thirteen months he himself served on the Korean peninsula. Whether this was autobiographical in any way, I have no idea but what came through loud and clear was the author’s command of the situation, the technical aspects of the weaponry and equipment, plus the differing motivations of the various combatants. I thoroughly enjoyed this easy read and can highly recommend it.

After the Korean War ended in 1953, the north and south of the country were divided by a 4-kilometer defense barrier called the DMZ (demilitarized zone). In January 1967, North Korean Pak Jun-Seok left his poor farming village to begin his brutal military training in service to his Great Leader. Meanwhile, Lorne Boyle arrives in South Korea from his home in Alabama. Lorne discovers on his first barrier duty that any North Koreans who are found on South Korean soil are fair game for execution. To evade capture and torture, Pak and his fellow new recruits are given suicide grenade training. A year later, Pak will be chosen for a dangerous mission called The Blue House Raid. This is an assassination attempt on President Pak Chung-hee of South Korea inside his imperial palace, which means first crossing the DMZ border. As Lorne's battalion hears of the attack, they move towards the imperial palace. This is a battle involving two men from similar backgrounds on opposing sides where there can only be one winner. Will Pak and his men succeed in their assassination attempt and help to unite the Korean people for The Great Leader? Although The Blue House Raid by Robert Perron is based on true events, the characters and situations are fictional.

The Blue House Raid by Robert Perron is an extremely well-written and interesting story based on history. I enjoyed learning about both sides of the conflict, not just from the American perspective. The characters were so lifelike. I immediately liked both Pak and Lorne even though they were enemies because their backstories were brilliantly written. I found the sub-plot of the relationship between Lorne and working girl Minhee so heartwarming, they shared some quite endearing moments together. However, the scene where Minhee was introduced to the lifestyle was chilling to read but highlighted the desperation Korean girls felt to escape their lives of poverty so vividly. There were excellent scenes of tension throughout which made this an absolutely compelling read, especially towards the end as the assassination attempt was being executed. However, there are some very emotional scenes too, especially when Pak visited Chong's family. Although this is a work of fiction, the plot really highlights the casualties of war and how little is thought of human life. The author also brought attention to the disturbing indoctrination of hatred the North Korean soldiers endured against the Americans. An absolutely compelling read and one that I would highly recommend.

Robert Perron’s The Blue House Raid is a perfect work of art. What makes perfection in a piece of literature? When plot, character, theme, setting, pace and style blend exquisitely to form a unified whole. South Korea’s presidential palace is called the Blue House, and in 1968 with the Vietnam War raging, North Korea launched a commando raid to decapitate the South’s president. Perron opens his novel by introducing us to the two protagonists, each in his own element—Lorne Boyle, an American sergeant stationed near the border between the two at-war countries, and Pac Jun-seok, a captain in the army of the North. We get to know them both intimately; their hopes, dreams, friends, surroundings. And we await their sure-to-come final face-off. In the meantime, as the tension builds each step of the way, Perron shows us the details of their worlds.

Books get no finer than Robert Perron’s The Blue House Raid, which is perfection itself. Reading it put me there by the kind of magic telepathy that great writers master. I felt the cold, the rough terrain, the whore houses and the girls who worked there, the poverty of both countries, the fanatic devotion of the North, the gritty service of the South’s American protectors. I anguished at the moral choices of Boyle’s decision to marry or not his yobo (mistress), and Jun-seok’s commando group’s to kill-or-not a group of Southern woodsmen captured on the way to attack the Blue House. In Perron’s almost unnoticed style (the best kind), there was only the authenticity of the story, an alien world of barbed wire, ditches, bunkers, hootches, paddies, weapons, dance clubs, and its military slang. Its life or death tension inching onward toward an outcome of two men of honor, enemies coming face to face in the midnight darkness of a frozen paddy—yes, I’ll say it again, The Blue House Raid is a flawless work of art.