The Other Man in Me 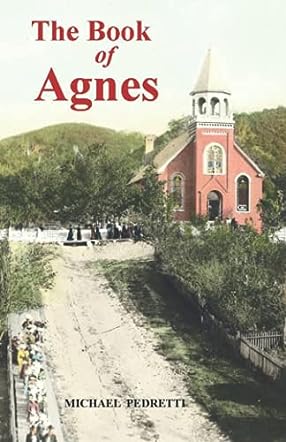 The preface to The Book of Agnes by Michael Pedretti reminds us that we are all descended from the same gene pool and may be related to every other living person on the planet. This book divided into Water, Earth, Fire, and Air. Air is the tale of Agnes who bore her first child in 1923 in a homestead called Moundridge just outside Badaxe in Wisconsin. She and her husband William were descended from Italian immigrants who left Europe for a new life in America, bringing with them their complete and almost fanatical belief in the Roman Catholic Church. As she grew into her teens Agnes yearned to be a nun, a desire that stayed with her for much of her life, but due to family pressure and rampant hormones, she married young and gave birth to fifteen children, only two of whom did not survive. William was a man of the times, showing limited affection for his children, and he ruled the family with a rod of iron; none dared annoy or anger him. His word was law and life revolved around his wants and his preferences. However, he was a good provider, working the land from dawn to dusk every day, except to attend Mass on a Sunday morning.

Agnes too worked tirelessly, not only with so many children but without indoor plumbing, electricity, and all travel was by horse-drawn carriage. As the years passed and modern conveniences such as the motor car, installation of electricity, indoor hot water, and mechanized farm equipment became available, life got a little easier. But in between, there was the Depression and a fire that destroyed the homestead; times were harder than ever. William had to work building roads far away from home. It was also an era when every member of the family was put to work the moment they climbed out of the cradle. There were good times and bad times but throughout it all, the faith Agnes had in the church never wavered.

As I read Michael Pedretti’s book The Book of Agnes I wanted to laugh, cry, cringe and applaud. This is a great book. It stirs emotions and leaves you in awe of the advances made in the twentieth century. To me, Agnes was alive in my head and in my heart. I wanted to shake her for her slavish devotion to the Church, and beg her to question the dominance she suffered from her husband but those were the times and that was the lot of women (and still is in many countries). As the introduction to the book reminds us, women like Agnes are the real heroes of the past, not politicians and generals who sent men to war. It was the mothers who gave birth to so many children and a couple of decades later sent them out into the world to procreate in turn. We should commemorate them instead. We may lionize the warriors of the past but we should honor those who dedicated their lives to mankind in a quiet, unassuming life and, in Agnes’ case, in total obedience to her church. Even as Agnes attends the baptism of her offspring, she still reflects that God must have wanted her to take this path, despite her desire to be a nun. Now, her greatest regret is that not one of her children gave their lives to God. This is a book I shall remember for years to come and I couldn’t give it less than five stars.

Michael Pedretti has written an interesting piece of historical fiction in The Book of Agnes. Come join the story of Agnes Genotti and her adventures through the first part of the twentieth century. You will experience life as it occurred. You will struggle with her as she, her husband William, and their children cope with all the hardships of the Great Depression. You will thrill with her as she and her family triumph over the Depression and move forward in the century. During the Depression, William had hired a hand to help on the farm. Would this new man be the downfall of Agnes’ faithfulness to her husband? This was a time when children were taught responsibility and a work ethic. This was a time when America still believed in old-fashioned morals. Become part of the family as you learn what life was like from the early part of the century until 1963.

I must admit I enjoyed reading The Book of Agnes. This is Michael Pedretti’s work of historical fiction following the life of Agnes Genotti. Michael’s use of imagery is superb. He is truly a wordsmith. The story shows the life of a typical American rural family during the first part of the twentieth century. This is a fast-moving story of life. It seems as if time flies from the '20s until 1963. Heartbreak, financial struggles, emotional issues, illnesses, and more will draw you into the story as if you are there experiencing life yourself. While this book is fiction, it is based on real people from a real family. This is just one piece of the series and if it is an example, I could recommend the whole series.

The Book of Agnes: A Novel About the Extraordinary Life of An Extra Ordinary Mother is the ninth book in The Story of Our Stories series by Michael Pedretti. This book tells the tale of an extraordinary woman who is a mother above all else. Living at a time when people were frugal in their spending, Agnes loved to share her love and herself with those who needed it the most. Money was never enough, but that did not stop Agnes from reaching out and spreading love. Although she wanted to be a nun, she married William Genotti and that was the beginning of a life Agnes never imagined she would have. From there onwards, she became a wife, woman, and, most importantly, a mother. It is the story of how she gave up her dream of becoming a nun and accepted the fulfillment that came with becoming a nurturer.

Agnes craved the feeling of being a mother and nurturing another being. You could feel that craving even when she was caring for the animals around her house and with the people in her life. It was surprising at first, to be honest. Agnes wanted to be a nun for her entire life, but the first hint of pregnancy changed that for her. From then on, Michael Pedretti shared how Agnes was a pro at handling her many children with a gentle hand that created more love than even she expected. The narrative was fast, the plot was interesting, and the author kept the interest of readers alive, making them invest in Agnes’s progress. You will make a connection with her, and you will feel like a part of The Book of Agnes! Very interesting.