A Kiss for Maggie Moore 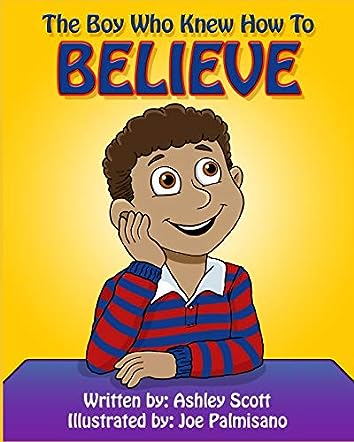 I am a former preschool teacher and I reside in Cleveland, Ohio with my husband and daughter. I have a bachelor’s degree in Early Childhood Education from Hiram College. As a teacher, I always enjoyed reading stories to my students, and I wanted to create books of my own that children could enjoy. The Boy Who Knew How to Believe is my first published book.

My younger brother inspired me to write this book. We had not come across any children’s books which focused on the principles of manifestation, and my brother encouraged me to create a story that focused on that concept. We thought it would be exciting to display these principles through a child, and my brother and I felt that this book could send a positive message to children, as well as adults, and encourage them to believe that they can accomplish any goal in life.

The Boy Who Knew How to Believe, written by Ashley Scott and illustrated by Joe Palmisano, is a children's picture book that follows a young boy named Nicky who is certain he will one day get the dog of his dreams. The book begins with Nicky at the park with his parents as he witnesses the joyful interaction between another child and their dog. The image of the bond the pair shared remains with Nicky throughout the rest of the afternoon and into the evening. In the absence of his own real pup, Nicky makes a drawing of his ideal companion and names him Buddy. The drawing remains with Nicky day and night, and is so prevalent in Nicky's thoughts that one of his friends makes fun of him for his drawing of Buddy, planting doubt in Nicky's head, until a visit from a kind uncle shows Nicky the true power of faith and optimism.

The Boy Who Knew How to Believe is the first children's book I've ever come across that has had the courage to rest its plot entirely on the idea of spiritual manifestation...and it's about time. Author Ashley Scott grants Nicky the agency to consciously assert his will for something he desperately wants without the influence or intervention from his parents, who remain conspicuously on the sidelines. Joe Palmisano brings the tale to life with full-color illustrations that are presented through original, vector-style depictions. I found Scott's overall story to be so refreshing. It's rare to come across a book for young readers that effectively moves outside the box, making Scott something of a trailblazer in paving the introductory foundation to the laws of attraction. In addition to this, Nicky is a little boy of ambiguous ethnicity. As a man of color raising children myself, this is important and even more of a gem when hinging a plot on new-age thinking. Overall, this is a satisfying read for both children and adults.