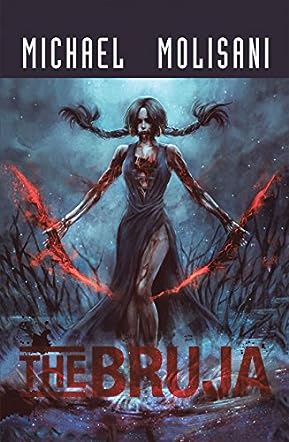 Michael Molisani has had a mind full of terrible horror and bewildering beauty his entire life. Unable to exorcise these visions of worlds beyond imagining, he set out to become a writer. Having no idea what a terrible decision this was, he soon went mad, burrowing into the unspoken mysteries of how to tell a story worth reading in a style both pleasing and entertaining. When he’s not hard at work writing, Michael Molisani can be found falling backward in time on the sidewalks of Virginia City, Nevada; or exploring the remote mysteries of The Great Basin. Michael and his wife, Kimberly, reside in Northern Nevada.

In The Bruja by Michael Molisani, the dystopian world after the Collapse sees magic as part of survival and key to winning wars. Ghosts and ancient spirits are no longer superstitions. Witches become a vital part of the army. Crafton city-state, a quarter of land of the old Pittsburgh, is under threat from the Federals. Their djinn-controlled army is bigger in size and harder to kill. Maggi, a respected witch in Crafton, must find a way to defeat the enemies that have been haunting her for a long time. She’s ready to die for that goal, but she might not be ready to face her past.

While the concept of witches is not new, the way it is developed into a story premise gives The Bruja a fascinating dark quality. It evokes our perception of morality, guilt, sacrifice, and love. Molisani builds an unforgiving dystopian era in the near future, weaving in myths, the paranormal and the supernatural as reality. Readers are given the first taste of this harsh world at the start of the story, when the protagonist Maggi Lopez makes a bargain with an ancient entity for power. The characters’ complexities, opinions, and personalities are well fleshed out, making their conflict, growth, and relationships credible. Molisani drip feeds the characters’ information as the story progresses, making it intriguing in getting to know them, particularly Maggi’s son, Alexander, who remains elusive but important until the latter part of the book. That said, I gravitated more towards Jennifer Winslow and her sense of integrity.

Despite slight repetitions, the narrative switches deftly between the present and Maggi’s past in California. Every scene is vivid－from the smoked cigarettes, the smell of bloodshed, to the unnatural whisper or screech of the ancient inhuman beings. The Bruja is an evocative dark tale of a flawed and conflicted woman fueled by her desire to protect the ones she loves. It’s a solid read and I look forward to the sequel.