The Boy With The Broken Smile The Case of the Invisible Souls 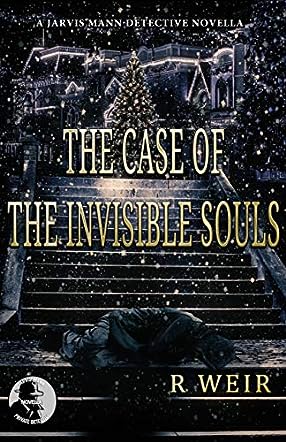 A private investigator risks his life to find a group of missing homeless people in the holiday sleuth novella, The Case of The Invisible Souls (A Jarvis Mann Detective Novella) by R Weir. It's a couple of weeks to Christmas and Jarvis Mann is eager for a new case. A knock at his door heralds an unusual visitor; a homeless veteran, Parker. Troubled by some strange activity going on within his community, Parker requests that Jarvis investigate the matter. According to the former soldier, the unusual circumstances began with some teens terrorizing the homeless in an old abandoned building where he temporarily lives. A few days later, a couple of men in a dark SUV visited, waving large sums of money around and offering a steady job to all those who came with them. Only, those who have gone with the men haven't been seen or heard from since. As he operates within the homeless community, shelter, and churches, Jarvis prepares to go undercover in some of the most unrelenting conditions he's yet experienced. Shortly, he finds himself embroiled in a sinister plot including a suspected mobster, hired assassin, and careless and uncooperative police. When Parker is attacked and left injured in a hospital, Jarvis must make a risky choice. Searching for Parker's only friend that has since disappeared leads Jarvis to hit the snowy streets. Can Jarvis find the lost homeless? Or will he die trying?

The Case of The Invisible Souls by R Weir takes the reader into the cold underbelly of Denver, Colorado, exposing the disrespect, trials, and endless anxiety of those living on the streets, while keeping the story surprisingly upbeat. I enjoyed the noir-like feeling of this novella, finding the contrast of our troubled hero's distaste of caffeine to be humorous - unlike most like most noir P.I.s who seem to have an obligation to remain liquored up. I appreciated how fleshed out the characters are, each with their unique traits and personalities that are sure to leave a lasting impression on the reader. With vibrant settings, a story that flows smoothly, and a diverse cast of characters, Mr. Weir expertly brings the story together, creating a dynamic short mystery. The tension is sure to draw the reader in from page one, holding their attention to a surprising conclusion that will be certain to leave them wondering what will happen in the next Jarvis Mann Detective Novella. This book will delight fans of whodunit and noir mysteries.