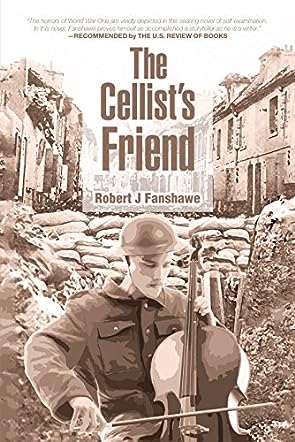 They call it the theater of war. It’s an excuse for whenever something goes wrong and no one wants to take the blame. It’s also a metaphor for what it means to be in the action, willingly or not. Everyone is a number and everyone, it seems, has a nickname. Cello is the man who plays the cello. He’s a deserter and, before he faces the firing squad, Cello is allowed to play his cello. One last time. Midnight is a Jamaican, nicknamed after the darkness of his skin. And then there’s Ben. What’s Ben’s nickname? He’s the narrator, the one trying to make sense of all the actors on this horrific stage, in this dreadful theater of war. His friends all die, but Ben survives. Barely.

There is no logic, no fairness in war, and this first-person narrative, told like a memoir, points out that simple fact with vivid accuracy. Robert J. Fanshawe’s novel, The Cellist’s Friend, is raw and thought-provoking, from the cruel opening of the music played before a firing squad to the hopeless brutality at the front, to the hospital wards and beyond. The reader is led through an emotional journey of reconciliation and self-discovery as Ben, the narrator, must come to terms with his place in life and his role on the stage known as the theater of war. A sad story, but one that is told with compassion and honesty.