The Cow and the Moon 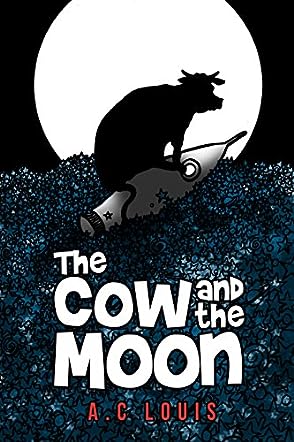 A.C Louis is an emerging science fiction and fantasy author from a far, far away land where the sun never sets and vicious dinosaurs roam freely (or as the locals like to call it: Costa Rica.) An avid reader since an early age, A.C one day realized that he also had stories to tell and odd worlds to describe, so he started writing and hasn't stopped ever since. Aside from writing, he has a full-time job as a computer nerd and an utter obsession with LEGO.

The Cow and The Moon is an illustrated book written by A.C. Louis. As the farm animals of The Moon Club gaze up at the round circle in the dark sky, they ponder its existence. Some of the members of The Moon Club, such as the pigs, Tom and Arnie, as well as Old Hound Dog, Luke, feel that The Moon is an illusion, just like the pictures that humans watch on their television, or Tee-bee. Elsa the cow, however, had learned a lot by sneaking up to the house and peering in the window while the Tee-bee was playing. She discovers that there is a big world outside of the farm borders – news which the other animals treat as absolute nonsense. One day, the Tee-bee talks about NASA sending humans to The Moon in a rocket ship; this is the exact moment that Elsa realizes that The Moon is no illusion, but an actual place. She wishes so badly that she could grow wings and fly there. When the farmer’s son returns to the farm for a visit, Elsa is distracted for a short time by the family reunion, but when an opportunity presents itself, she makes her escape from the farm, determined to board a rocket ship which will take her to the beautiful shiny orb in the sky.

This is seriously one of the most enjoyable and adorable stories I have ever read. I found myself chuckling numerous times throughout, especially at how the animals describe human things. Carrots are branded as anti-social due to the fact that the farm animals are not permitted to go near them. They are permitted, however, near the farm’s tree (which the animals call Randy), though he doesn’t talk at all, so may possibly be related to The Moon, as it doesn’t talk either. The Tee-bee seemed to contain a wealth of knowledge for Elsa. Watching the rest of the farm animals turn their backs on what they found too incredulous, knew nothing about, or feared seemed to mimic real life in many ways. It was fun to see the world through the eyes of farm animals, as they have such an innocence which reflects in the pages of The Cow and The Moon. I enjoyed every single page of A.C. Louis’ magical tale. I recommend The Cow and The Moon to readers of all ages who enjoy some wonderfully lighthearted humor tinged with a special depth that takes us away from the everyday norm.