The Curse Of the Nightshade 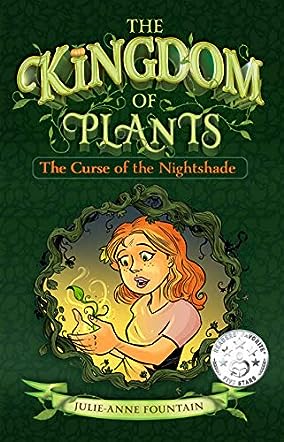 Laurel loves plants: flowers, trees, vegetables, even weeds. Her mother hates anything that grows in the dirt. Or so she leads Laurel to believe. That was before things became rather strange. Before Laurel’s home, the apartment she shares with her mother, turns into a jungle, her mother disappears and a mysterious woman by the name of Iris appears and tries to explain that Laurel and her mother really belong in an alternate world, one that is all plant-based. Well, certain plants, anyway. It would appear that there are rules to follow even in the plant kingdom. And it’s a kingdom like all others, complete with evil minds doing evil deeds to take control, to have full power over one and all. And, in this kingdom of plants, the evil mind has the ability to merge seeds with humans, creating a plant monster that only he can control. A Nightshade.

Julie-Anne Fountain’s Middle Grade fantasy novel, The Curse of the Nightshade: The Kingdom of Plants Book 1, has all the elements of a good adventure. Strong, loveable protagonists, strong but evil antagonists, a fascinating plot and lots of excitement to lead the reader into a garden maze of fun, fear, and action. Imagination takes flight in this story as plants threaten to take over, but the magic of good makes a powerful adversary as Laurel and her new friends from the kingdom of plants fight, lose and fight again. Hidden behind this action-packed adventure are some elements of societal and ecological significance. Laurel speaks out with conviction for the importance of plants, for the importance of things that grow in the earth.

Her love of plants makes her appear to be a freak in the human world. She is teased and bullied, but her resilience to carry on with her determination to save all plants is touching. She makes a strong character in so many ways, a character that would certainly appeal to young readers. Even the kingdom of plants has its bullies. But the power of good magic can overcome that as well. In the human world and the plant world there is a sense of imbalance. The credo, unity in diversity, speaks out to those who would rid the world (both worlds) of specific seeds (plants) and humans that don’t fit the norm. It’s a form of prejudice, discrimination to try to annihilate something or someone just because of a difference. A fun adventurous read full of strong, important messages.