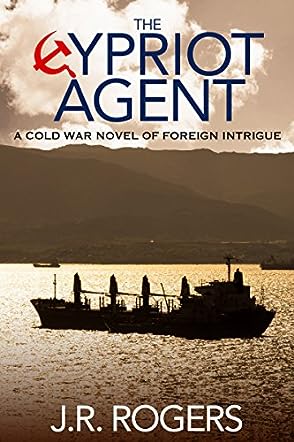 The Cypriot Agent: A Cold War Novel of Foreign Intrigue by J.R. Rogers takes us right back to the height of the Cold War, the 1970s when rival intelligence agencies from both the West and the Soviet Bloc were engaged in tit-for-tat espionage and spying in the hope of gaining some minor advantage over the other. Fiancée to a U.S. Presidential Adviser, Marina Kovalev, known in the U.S. as Brenda Farber, is actually a Soviet deep-plant agent and uniquely situated to gather interesting tidbits of information for her Soviet handlers. When the FBI arrests her, a high-level decision is made to allow her to return to Moscow to avoid the embarrassment of admitting to the world that a Soviet spy had infiltrated the highest ranks of the U.S. government. The C.I.A., however, has other plans for Marina/Brenda. In their mind, this rogue spy can never be allowed to impart her knowledge to the Soviets, never mind being used to teach other potential spies her significant spy-craft. No, Marina must be eliminated with plausible deniability. They select a Cypriot by the name of Georgios Spyrou, an assassin regularly used by Britain’s MI6 in the past, to perform the deed. Marina is being smuggled out of the U.S. aboard a Russian freighter set to call at Georgios’ home port of Famagusta in Cyprus. His job will be to eliminate Marina. So begins a cat and mouse game redolent of all great Cold War spy thrillers.

The Cypriot Agent is a nostalgic journey back to another age for me. I cut my reading teeth on such authors as Le Carré, Greene, early Clancy, Fleming, and many more. What a pleasure it was to read, what, since the collapse of the Soviet Union, has become somewhat of a dying art – an out and out espionage thriller. J.R. Rogers has put together a totally believable scenario and one that played out regularly between the rival intelligence agencies. The carefully constructed, twisty, and at times surprising plot was a joy and reminiscent of the helter-skelter thrillers of old. I particularly appreciated the insights that many of the players in this theater of spies brought to their understanding of their roles within the giant espionage machine.

What also stood out for me was the vast machinery, time, effort, and money poured into this rather fruitless exercise of intelligence by both sides of the spectrum that ultimately seemed to do little more than balance out the other side’s efforts. The author’s style is uniquely evocative and I found myself deeply drawn into that '70s world, where everyone was suspicious and where even the most ordinary of actions could be perceived to be deceptive. I thoroughly enjoyed this nostalgic trip down memory lane to a very different world, yet one that was just 50 years ago. I can highly recommend this read.