The Demons of Plainville

A Survivor’s Story of Storms and Reconstruction
by Daniel R. Mathews
Non-Fiction - Memoir
292 Pages
Reviewed on 05/05/2015 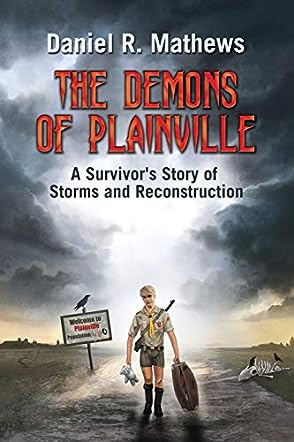 An avid reader of science fiction, horror, and fantasy, Daniel R. Mathews is a novelist and nonfiction writer whose books feature LGBT youth braving danger with honor and dignity, including his personal memoir, The Demons of Plainville, and debut horror novel, The Unseen Kingdom.

For the past two decades, Mathews has worked as a Federal Aviation Administration (FAA) certified ground instructor, meteorologist, and member of the web development and Internet technical support community. He currently lives in Flagstaff, Arizona.

The Demons of Plainville: A Survivor’s Story of Storms and Reconstruction by Daniel R. Mathews is an inspiring true story of a boy and how he overcame his past. The Demons of Plainville is a first-person autobiographical narrative by Daniel Mathews. He tells us about his childhood, beginning with one of his earliest memories of abuse, both verbal and physical, at age eight at the hands of his addicted, mentally ill mother. Raised in Massachusetts mainly by his mother and grandparents, Daniel’s childhood is bleak. His mother believes in the Satanic Bible and deals in Satanic masses and occult practices. She also emotionally abuses Daniel by falsely accusing him of stealing, among other things, and punishing him for it. At the age of eleven, Daniel’s father suddenly appears out of nowhere and takes Daniel to live with him. For a while, things seem to improve for Daniel as he bonds with his step-brother, Sam. However the cycle of physical abuse continues, this time from his father. As he shuttles back and forth between various homes and is abused and neglected, Daniel is also dealing with his own homosexuality and the challenges of fitting in and finding his identity in a society that is often openly homophobic. In the end, this is a story of survival and courage as one man battles the demons that threatened him, and emerges stronger and wiser.

The Demons of Plainville by Daniel R. Mathews is an inspiring true story and I found Daniel’s frank, no-nonsense, tell-it-like-it-is style of writing to be very engaging. I got the sense that Daniel truly is a survivor and wants to genuinely offer hope to other people, and children who have been neglected or abused, that a better life is possible. The issues of homophobia and prejudice in today’s society are addressed as well. I hope that reading a book like this will initiate discussion and, hopefully, more widespread acceptance of all people, regardless of race, gender, sexual orientation, etc.