The Devil and the Darning Needle 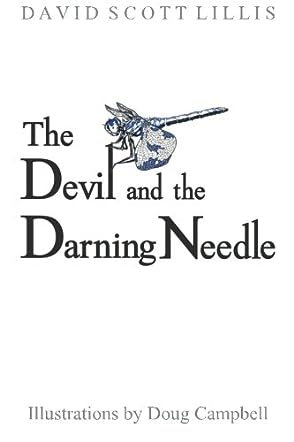 David lives on the gulf coast of Florida with his wife and their menagerie (including avian, feline and reptile inhabitants). He shares his office (and more often than not his desk and chair) with their cat, Einstein, who also travels with them when his schedule allows.

The Devil and the Darning Needle by David Scott Lillis is a charming fable for children. It tells the mythical story of why dragonflies have the ability to fly - because the Devil bestows the ability of flight upon them in exchange for their agreement to leave harmful and negative messages or whispers in the ears of humans. Once all their whispers are spent, the Devil gives them the gift of rest before they die and are reborn to repeat a similar life. Nigel is a beautiful and large dragonfly but discovers he can fly anyway and refuses Ditch's (the Devil's agent) whispers. More than that, he begins leaving good messages in the ears of humans instead, and takes on the burdensome messages of fellow dragonfly, Reardon. Nigel has to encounter the wrath of the Devil for doing this, and then makes an interesting discovery that is the beginning of a different way of life for all dragonflies.

I loved The Devil and the Darning Needle: an intriguing fable that has a lovely message about thinking for yourself, being true to yourself, using instincts for good, and making a stand for something better. There is the hint of a Christian theme with Nigel carrying Reardon's burdens/whispers for him so that he can be free. David Scott Lillis has created well depicted characters and children will warm to the heroic Nigel. It is easy to be drawn into the story as the plot unfolds. It moves along at a good pace and builds to its climax when the dragonflies meet with the Devil and Nigel makes his escape. The author weaves a moral thread carefully through the tale, using the traits and situations of the different characters to put this across. The black and white illustrations are the perfect complement to this well crafted story too. A story that is not only entertaining but one that teaches children good values, including recognizing we are free to make choices, and the importance and consequences of those choices.

The Devil and the Darning Needle is a children’s fable written by David Scott Lillis and illustrated by Doug Campbell. Each spring, thousands of slug like creatures crawl up out of the Red River, climbing onto reeds and grasses along its banks and awaiting their transformations into their iridescent winged dragon forms. In accordance with an ancient pact made with the devil, a demon would next give them each an allotment of evil whispers while granting them the power of flight at the same time. The new darning needles were charged with finding human recipients for those whispers, and, when their task was completed and they were tired, they would be escorted down to hell by that demon where they would regale the Devil with tales of the evil they inspired. Nigel was not so sure about the transformation from his fine, round and burly gray form into something winged, and he was in no hurry to join the others waiting for Ditch, the demon, to arrive. His hesitations were brought to an abrupt end when a young fishing hawk grabbed him up for dinner. During the hawk’s efforts to evade the attempts of other hawks to steal his treasure, Nigel began his transformation into a large and particularly brilliant dragonfly, and the hawk was left defending his right to a withered husk. Nigel’s wings had not yet dried when he found himself in the air ... so did he need those evil whispers after all?

David Scott Lillis’ children’s fable, The Devil and the Darning Needle, is an original and lovely continuation of the Devil tales that began with Washington Irving’s The Devil and Tom Walker, and followed with the later, and more popular, The Devil and Daniel Webster, written by Stephen Vincent Benet. I was especially struck by the author’s gifted nature writing and found myself easily visualizing the gemlike dragonflies as they hovered in the air. Doug Campbell’s pen and ink drawings are superb, especially the panel showing the fishing hawk and Nigel as he transforms into an adult dragonfly, and his drawing of Ditch, the demon. The Devil and the Darning Needle is lyrically beautiful, and there are passages in it that just beg to be read aloud. This fable that is nominally for children will speak to readers of all ages, and it’s most highly recommended.

In The Devil and the Darning Needle by David Scott Lillis, Nigel is a dragonfly, a very large, beautiful dragonfly. Also known as the devil's darning needle, because of his long, pointed body, Nigel is born with a purpose. Only he doesn't like his purpose. He doesn't like the idea of belonging to the devil and having to carry around the devil's evil whispers to plant mischief in the ears of some unsuspecting person. But, in order to break free from his cocoon and have the ability to fly, Nigel must accept these whispers. This is what he's been told, but he doesn't want to carry these whispers and when he discovers something different, he makes it his mission to prove the devil's purpose to be wrong and evil and even counters a whisper with a whisper of his own, thus preventing a woman from committing murder.

David Scott Lillis has written a delightful fairy tale about a dragonfly. Like all fairy tales, this one has a message, a lesson, perhaps one that is being told as a whisper. The message, the lesson, is about gossiping and how evil things can happen through the simple act of sharing gossip - evil thoughts, evil deeds, bullying, even murder. These whispers that Nigel refuses to carry for the devil are, in fact, tidbits of gossip. These whispers are mean, with the intention of inciting evil deeds.

Written like a classic Grimm's fairy tale, Nigel's story shares the simple revelation that one doesn't have to do what everyone else does, just because everyone else has always been told to do it. One person, standing up against an evil deed, like spreading gossip (whispers), can start a movement of many people standing up against evil. Great story. Great message. Lovely line drawings.