The News from Arkansas

The Devil's Own Day 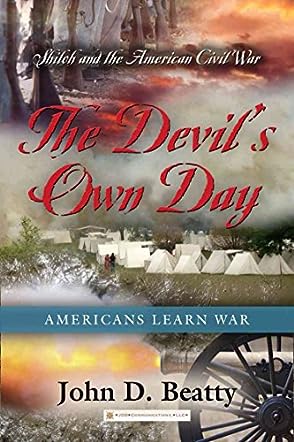 The American Civil War was one of the worst conflicts in American history as the scale of the battle – and the losses in terms of people killed, wounded, and missing in action – quickly surpassed the expectations of both the North and the South of a “short, quick war.” One of the earliest, and costliest, battles was the Battle of Shiloh. Fought in an out of the way location, away from any major centers of commerce or cities, along the Tennessee River in northern Mississippi, the battle was fought over two days and was the worst battle – in terms of loss of life and casualties – up until that time. The Devil’s Own Day: Shiloh and the American Civil War is John D. Beatty’s detailed analysis of this forgotten but very important battle.

Beatty admits in his introduction that there have been many books on Shiloh and the men who fought the battle, and that The Devil’s Own Day is one of exploration. He doesn’t provide in-depth background on the principal players, and there are no long quotes from diaries and letters. Beatty’s style might fly in the face of what other historians have done, but for this battle his style of analysis hits home. Beatty provides a basic background for the reader about the nation leading up to and at the time of the battle, enough to give the reader a firm footing in the events that led up to the Civil War, but not so much as to lose sight of this critical battle. He also gives us a brief overview of the generals who led the troops at the battle on both sides of the conflict. Again, enough detail is provided so we know who these men were, but Beatty avoids long-winded tangents that are not relevant to the battle.

One of the aspects that I enjoyed in the early chapters was that Beatty touched on the militia tradition that had been the backbone of American military power for nearly a century. This tradition is so different from the standing armies of Europe, and it is very important for the reader to understand how these units acted and functioned, especially in the face of the events at Shiloh and other Civil War battles. I greatly enjoyed the insight that Beatty gives the reader with this information. As to the battle itself, Beatty focuses primarily on the regimental and battalion level of the conflict. Individual stories of bravery and heroics are generally left out in favor of a larger view of the conflict as related by the regimental commanders. Readers who are looking for a retelling of individual heroics and bravery may want to find other sources, but if you want a detailed, military analysis of the battle, including the ebb and flow of the divisions and artillery batteries as the battle wore on, then The Devil’s Own Day delivers. Beatty also does a great job of analyzing the decisions made by commanders on both sides, the good and the bad, and takes care to parse out fact from what has become historical myth about the battle and the generals. This analysis, and the hard look that Beatty takes to determine fact from myth, makes The Devil’s Own Day a very worthwhile addition to any Civil War collection. I recommend this book to anybody with an interest in the Civil War and American history.