Till Heaven Then Forever 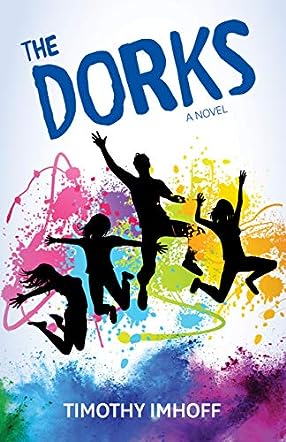 The Dorks by Timothy Imhoff is a light-hearted look at coming-of-age. Jason Davis has spent the bulk of his young life living with his grandparents in Sarasota, Florida after his mother was tragically killed in a car accident when he was eight. Unable to cope with the memories and the tragedy, Jason’s father, Jesse, had moved to Portsmouth, New Hampshire, leaving Jason in the excellent care of his grandparents. Jason usually spends a couple of weeks each summer with his father. However, now he is seventeen, and entering his senior year in high school, Jason has decided to move in with his father and try to reconnect. For Jason, leaving his friends behind in Florida and making new ones was always going to be difficult but he’s a confident young man, talented academically, sporting-wise and musically, so he is sure he will find some like-minded young people to latch onto. When he meets Alex, a talented cross-country runner like himself and others in his homeroom class, he quickly realizes this is going to be a great senior year. His new, extremely diverse group of friends find they have a lot in common as well as a passion for social justice and music. Amidst some bullying and fear, Jason and his new comrades set about making the most of this last year of high school together.

The Dorks is a sweet, engaging, and easy to read treatise on coming-of-age. Author Timothy Imhoff has developed some teenage characters that are engaging, relatable, and most importantly true to the character of teenagers, who test boundaries but are still constrained by strong moral compasses. I loved the fact the author used his story to illuminate and offer solutions to one of the major problems facing young people in America today; that of fear and gun violence. Although much of the story revolves around developing relationships, friendship, respect for others, and the understanding of diversity and its beauty, the author does a great job of highlighting bullying and the appropriate response to this pernicious tactic so prevalent in society but especially so amongst young people. Being far from that age, I wasn’t sure if the language and street-smarts were appropriate to the current crop of young people but, for this oldie, they certainly rang true for me. The style is flowing, the narrative interesting, and the story is comfortable. This is the sort of book you can relax with on the couch on a Sunday afternoon and read from start to finish in one go. I am impressed by this author’s work and can highly recommend it.

The Dorks is a young adult coming of age novel written by Timothy Imhoff. Jason Davis didn’t feel good about starting in a new high school for his senior year. He had adapted to living with his grandparents which he had done since he was eight years old, and was used to his school in Sarasota, Florida, where he had friends, competed in track, and played in a group. This was, however, a chance for him to live with his dad full-time. He had been coming up to Portsmouth, New Hampshire, where his dad had a house on a lake for summers for a few years now. And while he relished the idea of being a family with his dad again, he still was nervous about being the new kid as he drove to Portsmouth High for his first day. He was still a few blocks away when he saw a group of runners in what looked like school gym attire. One of them was blazingly fast; ironically, he or she was the smallest of the group, but Jason, who excelled at cross-country, felt he might have met his match. He followed them with his eyes as they headed back towards the campus. This was it, he realized. He would have to roll with the punches and see what happens.

Timothy Imhoff’s The Dorks is a well-written story about the challenges and experiences seventeen-year-old Jason Davis faces as the new kid in school, fresh from Florida, and now living and going to school in New England. Watching as he navigates the school bully, becomes friends with the runner who is most definitely faster than he is, and meets a girl is grand fun. Imhoff’s plot is original and engaging, and his characters feel genuine and real. And the kids Jason meets? For the most part, one can’t help but feel he did quite all right for himself. The Dorks is enjoyable and well worth getting involved in. It’s most highly recommended.