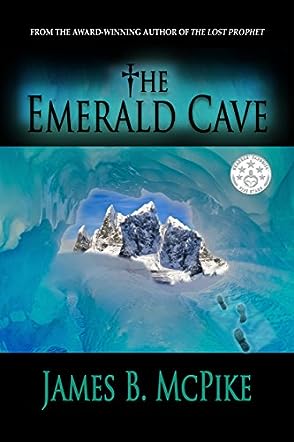 The Emerald Cave is the epic finale to the acclaimed Ramsey trilogy six years in the making. This book reveals hidden secrets of the Grail and where it might be today. McPike's previous book in the series THE LOST PROPHET was the 2016 winner in Christian Retailing's Best Awards for mystery/suspense. This was an incredible honor as NY Times Bestseller Joel C. Rosenberg won it the year before. In addition THE LOST PROPHET won the PACIFIC BOOK AWARD for Christian mystery/thrillers and the BEVERLY HILLS BOOK AWARD for Religion Fiction.

In The Emerald Cave by James McPike, when Vince Ramsey is called in to follow up a promising lead on a very dangerous arms dealer, he readily accepts and is up for the challenge. He, however, could never have guessed how deadly an enemy he is going up against. The first lead points to France so Ramsey and April set off for France. April's extensive knowledge of antiques and history in general comes in handy from the very start. However, France turns out to be just the beginning of the chase. Both April and Ramsey are no strangers to danger, but this is bigger and more deadly than they could have imagined. In a race against a dangerous criminal, Ramsey holds the fate of the world in his hands, and time is not on his side. The chase will take him across several borders and his adversary is powerful and ruthless.

The Emerald Cave by James McPike is a captivating, fast-paced read that will take you across the globe in a race to save the world from the intentions of an evil and powerful enemy. Expect an adrenaline-pumping thriller that will keep you on the edge of your seat in a race against danger and against time. James McPike has crafted a story that combines all the ingredients to create a captivating thriller and fans of the genre will have a fulfilling reading experience. The characters, setting and the general plot all come together nicely to make The Emerald Cave a worthy read.