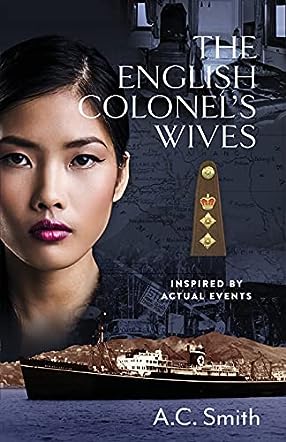 There was something left unfinished with the characters of "Deeply With The Sun In Our Eyes" sailing off into the unknown.
Major Newton had burst into the last days of Singapore and shaped the denouement but where did he go and from whence had he come? There were other loose ends. So he emerged as the colonel in "The English Colonel's Wives."
Malayan communist insurgency after the war had led a great Australian, Lieutenant-Colonel Sydney Kyle-Little, to command 12,000 part-timers and a regular force in the state of Negri Sembilan between 1950 - 1957.
I met Syd in 1997 and we became close. He knew the meaning of leadership and hand-to-hand mortal combat. Syd also introduced me to the history of Field Marshall Sir Gerald Templar under whom he served.
Thus formed the backdrop to "Wives" though Newton and Kyle-Little were as disparate in composition as chalk and cheese.
My novel is about a man willing to give all in supposed atonement for the past and, seemingly, never quite able to move on.
Me? Many days at sea on the world's great oceans as a marine engineer and passenger earns some literary baggage. What better reading than an open deck in the Pacific and Indian oceans?
Thirty years of legal cases as a barrister, the challenge of rooting out the truth from fiction or conflation, usually both, an expectant jury, crusty judges and a prosecution determined to win, sometimes at all costs.
A life inhabited by multifarious characters, good, bad and fascinating.

The English Colonel’s Wives: Inspired by True Events by A.C. Smith takes us back to the first half of the twentieth century but predominately to the period post World War II, as the great British Empire began to disintegrate under the weight of native dissatisfaction and colonial over-reach. It is 1949 and an eclectic bunch of passengers is aboard the New Zealand Star, heading from Singapore back to Britain via South Africa. Colonel Newton, after a successful military role but a less than stellar political performance in Malaya, is heading back to Britain with an extremely important planned visit to someone in Port Elizabeth (SA) along the way. He strikes up a shipboard friendship with an attractive young Eurasian widow Nancyng Jenkins and her daughter. Together, on the long journey to South Africa, the pair begin to share their life stories with each other; however, both it seems are holding secrets back – secrets that may in fact be intertwined in some way. Also aboard the ship is a willful young heiress, Henrietta, who is also set to play a part in the couple's past, present, and future. When Colonel Newton is recalled to Malaya to help in the search for the elusive and deadly communist rebel, known as “the Huntsman”, all of the characters' carefully crafted and shrouded pasts will explode into their presents and their futures.

The English Colonel’s Wives is an artfully crafted and cleverly plotted novel of love, life, and drama that draws the reader into the twisty events from the very first page. A.C. Smith is a master at creating a jigsaw puzzle that, at first, seems simple but ultimately proves to be deeply challenging. I love a story where synchronicities abound and each character is somehow linked to the others, even if they and initially you are unaware of it. This is definitely one of those stories that shock and surprise (delightfully so, at times) as each coincidence and synchronicity is revealed. I will admit to guessing one of the main premises of Colonel Newton’s story but many more left me open-mouthed and speechless at times. The two main characters were beautifully drawn. Colonel Newton was everything you would expect from a British Army Colonel, brusque, overbearing at times, stiff, and deeply conservative and yet the author managed to imbue him with such depth of warmth that it was a true credit to his literary skills. Nancyng, equally, was wonderfully drawn as a Eurasian woman caught between two worlds with a foot in both and a place in neither. The harbinger of a deep, dark, past, she was also every bit a European lady, with style and manners so befitting. The plot is complex and exciting. This is a book you will not want to put down. I thoroughly enjoyed it and can highly recommend it to anyone who loves intrigue.

Shipboard encounters between Colonel Newton, a striking widow, and a spoiled heiress entangle them in the schemes of a Malayan terrorist in the suspenseful literary novel, The English Colonel's Wives by A.C. Smith. Colonel Newton and Nancyng Jenkins meet aboard the ship, The New Zealand Star. While the two passengers spend time together, the Colonel explains that he is on a sad mission to fulfill the wish of a friend who has recently passed away. Mrs. Jenkins barely scratches the surface of her mysterious past before an onboard tragedy occurs. The results of the misfortune change the course of their blossoming relationship, and the Colonel stays behind at the next port while Mrs. Jenkins continues on her journey back to England. Despite the miles and circumstances, the two of them correspond as the years advance. Nancyng resides in London, and the Colonel and his family are living in Malaya. In a twist of fate, a terrorist fighting Malaya's new regime unexpectedly brings the Colonel and Nancyng together.

Based on true events, The English Colonel's Wives by A.C. Smith is a sensational novel that captures some of the conditions of the Malayan Emergency that occurred during the middle of the twentieth century. Brimming with suspense, the story realistically portrays and captures the essence of the Malayan war's aftermath. With the plot's intricate construction of the core characters' relationships, the romantic elements of the story are enigmatic and engaging. Due to the complex situations surrounding the main characters, I teetered between indignation and admiration while they sorted out their lives. Skillfully created, the multi-faceted aspects of their temperaments, dispositions, and psyches, the characterizations of the Colonel, Nancyng, and Henrietta give them genuine personalities that are real and relatable. Expertly written, this extraordinary book will enchant and entertain everyone who loves literary novels charged with intrigue and romance inspired by history. The book is worthy of five stars all the way across. It is superb!

The English Colonel's Wives by A.C. Smith is an historical fiction novel set during the period of the Malayan Emergency. Inspired by true events, the book follows the passengers aboard the New Zealand Star as they make their way to England. Colonel Reginald Newton spends his days at sea conversing with the unflappable Nancyng Jenkins -- a young widow with an eleven-year-old daughter named Charlotte -- and regales her with tales of his childhood friend Magnus and his unfaithful wife, Esrelle. But his hopes for a quiet and leisurely trip are dashed when an incident occurs involving the Onions family and their daughter Henrietta. As Reginald eases himself into his new life, he finds himself summoned by Sir Gerard Templer to travel back to Malaya to track a notorious felon.

The English Colonel's Wives is something of a slow burn that ages like a fine wine as the plot progresses further. A.C. Smith writes with a flair that suits the era and setting perfectly and instantly transports the reader back to the 1950s. Much of the conversations between the characters are presented in a way where the content has to be inferred through context rather than absorbing it at face value. I found the characters filled with layers of depth, and their backstories add a lot to make them feel sympathetic to the reader. Reginald, Nancyng, and Henrietta are multi-dimensional with distinguished personalities. I will highly recommend The English Colonel's Wives to readers who enjoy historical fiction.